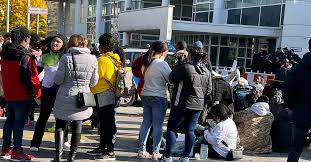 Sierra Leonean migrants in Germany had on Monday, October 18, 2021, staged a peaceful protest against the deportation of over 1000 asylum seekers who travelled through the Sahara desert and the Mediterranean Sea to reach Europe to find greener pastures.

This protest is coming after news broke out that the German government will be deporting over 1000 Sierra Leonean migrants because they are entering the country using illegal routes.

However, the protesters were seen on the streets holding placards asking the German authorities to stop the deportation process because many of them went out there to find greener pastures and make a better change in their lives.

According to a publication by Sierraloaded Media, a German Sierra Leonean did say that they are scheduling to meet with the Sierra Leone Consulate in Germany to put their case forward and plead with the authorities to stop the deportations of people who struggled a lot to find greener pastures in foreign countries.

Meanwhile, Sierra Leoneans at home and abroad have taken to different social media platforms in solidarity asking the Sierra Leone government to intervene in this, so that those people will be able to stay in Germany, work and make a living. So far, there has been no official statement yet from the Government of Sierra Leone.

Stay tuned for more information on this story.