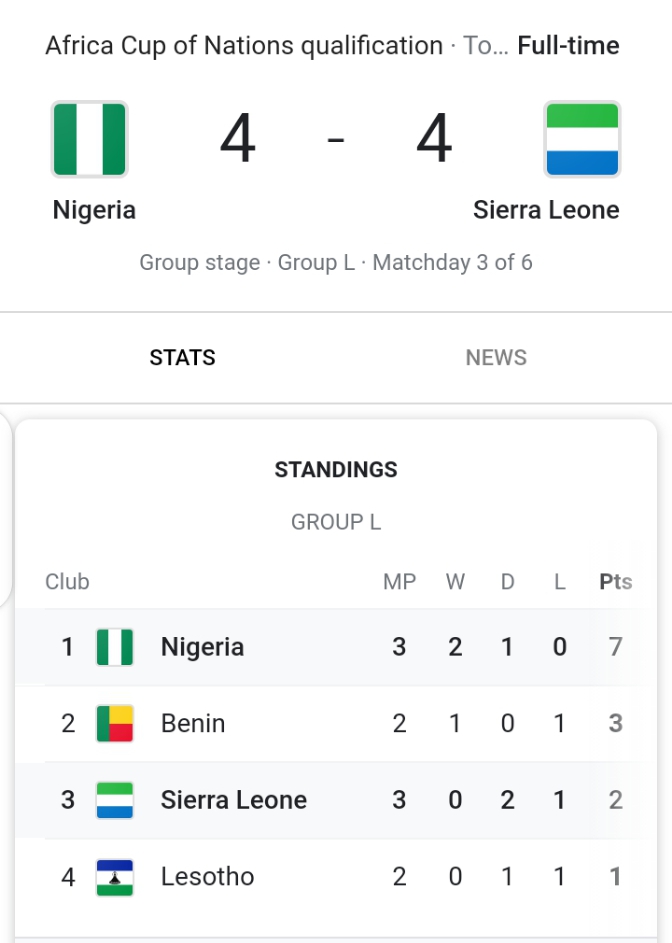 Sierra Leone had to come from behind to level a match that had already seem lost after 30 minutes of play. The Super Eagles took an early lead in the fifth minute then added 3 goals within 10 minutes to extend their lead to 4 goals. But just before the teams went in for half time Sierra pulled 1 back or what many considered as a consolation goal.

This is the fifteenth time that Sierra Leone and Nigeria have faced each other, with the Super Eagles winning 9, drawn 4, and lost 2 of those encounters. The draw sees Leone Stars climb up to the third position in group L of the 2022 AFCON Qualifiers whilst Nigeria still remain top of the group.

Before the match, there was a bit of controversy in the Leone Stars camp after a video including star striker Kei Kamara went viral. In the video, the striker expressed his dissatisfaction of the hotel the team stayed at in Benin City, Nigeria prior to the match against the Super Eagles. Hours after the video went viral the Sierra Leone Football Association (SLFA) released a press release condemning the strikers’ behavior distancing themselves from the whole incident and also stating that a disciplinary investigation will be opened.

But however, the team did not relent, they put in all efforts and at least came with a draw. The first goal for Sierra Leone was scored by Kwame Quee four minutes before half time, then Alhaji Kamara seconded it in the 72nd minutes, later on, Mustapha Bundu scored the third goal in the 80th minutes and Alhaji Kamara equalized with an assist from Bundu in the last five minutes of the game.

The second leg of the tie will be played at the Siaka Stevens Stadium in Freetown next week. Also, in March 2021, the team will play Lesotho and Benin respectively.