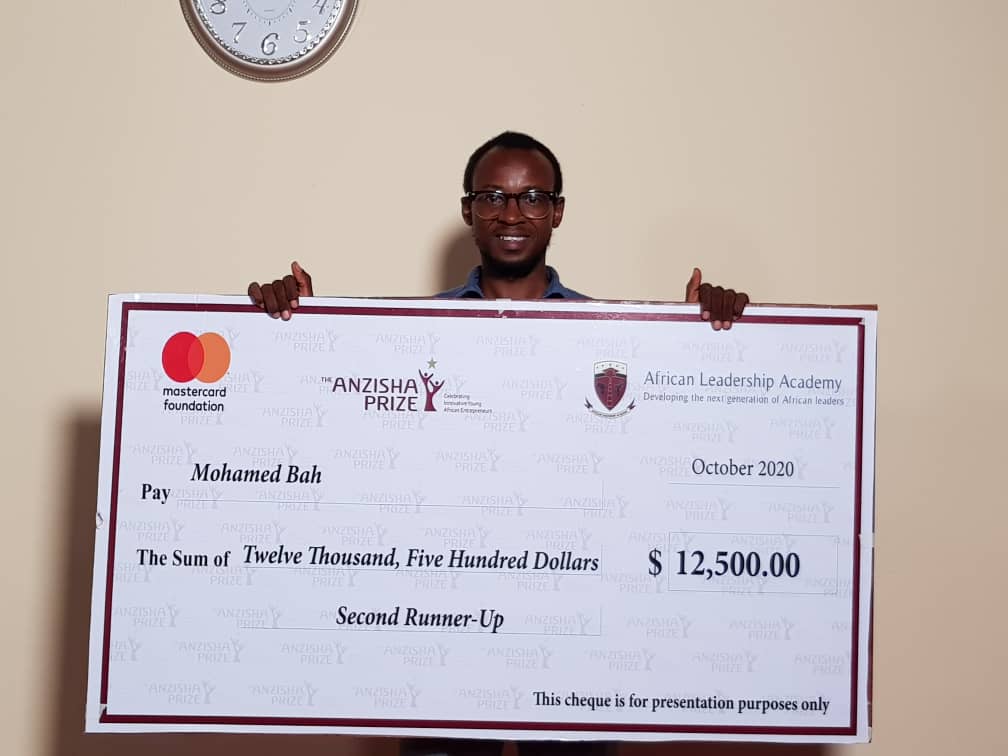 Mohamed Bah a 22-year-old Sierra Leonean entrepreneur has won third place in this year’s Anzisha Prize. He will receive $12,500 to scale his idea to provide clean safe drinking water.

Bah is the CEO of Information for All ( IFA) a social enterprise that builds boreholes and water wells.

“Entrepreneurship is the way forward, ” says Bah. “Government cannot employ everybody and if we venture into entrepreneurship then Africa is going to be better as a continent.”

Bah understands the importance of hard work and perseverance in entrepreneurship. This is the second time he has applied for the Prize.

“I first applied in 2018 and I made it into the top 100 but I was not successful beyond this stage because we didn’t have much impact at that time,” says Bah. “It is a very competitive award and it is not easy to make it into the final three.”

“Anzisha really wants to know that you are making money and you are impacting society. Since 2019, we have constructed about 54 water wells and impacted the lives of around 100,000 people. We’ve also created 150 jobs at the same time.”

Bah’s clients are both individuals and organizations but when wells and boreholes are installed they often benefit whole communities.

“We have worked in several communities across the country in Moyamba, Port Loko, Waterloo, Dwarzackk and Funkia,” says Bah.

Like most social entrepreneurs, Bah is not only focused on profit-making, social impact is what drives him. His company’s prices are lower than his competitors.

“When we are talking about drilling boreholes they can cost 60 million Leones but we charge less than 5 million leones. It is cheap so a lot of people will get access to it,” says Bah.

He was not able to travel to South Africa to participate in the Anzisha Awards because this year’s ceremony was virtual due to the Pandemic.

“I enjoyed the whole process and felt inspired by the stories of the other twenty finalists through our Zoom sessions.”

Two years ago Sierra Leonean Siraj Bah (no relation) was a semifinalist for the same prize. He won $15,000. Mohamed Bah is the second Sierra Leonean to bring home the grand prize.

The Anzisha Prize is an African award for young entrepreneurs aged 15 – 22 years, and hands out over USD $100,000 every year in prize money to entrepreneurs from all over the continent.