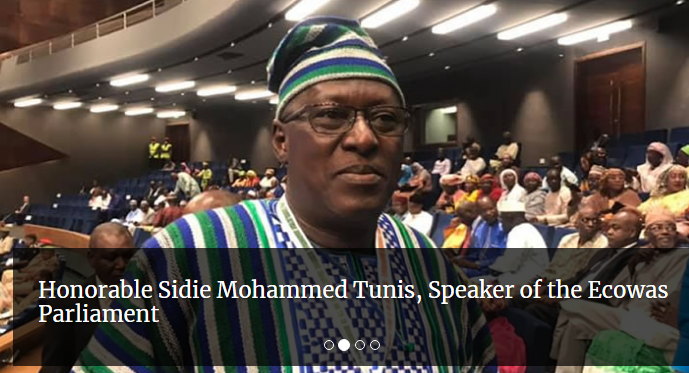 Sierra Leone’s Honorable Sidi Mohamed Tunis has been elected as the new Speaker of the ECOWAS Parliament. The inaugural session of the 5th Parliament of the Economic Community of West African States (ECOWAS) is held from 9 to 13 March 2020 in Niamey, Niger.

The ECOWAS Parliament is a forum for dialogue, consultation and consensus for representatives of the people of West Africa with the aim of promoting integration.

His election was unanimous amongst the 15 member-countries in the sub-region, at the inaugural session of the 5th Legislature of the Parliament. He is expected to serve in that capacity for 4 years. The Speaker is expected to direct the business of the Parliament and its organs. He presides over meetings and conducts the debates in accordance with the provisions of the Rules of Procedure.

Hon Tunis paid tribute to past leaders of the Parliament and thanked them for laying a solid foundation for the present Legislation in his inaugural speech to the Parliament.

“Today, I stand in humble appreciation to all the Honorable Past Speakers for the endurance and passion with which they conducted this office and ensuring that it occupies its rightful place in the sub-region and beyond”.

“They fought a good fight; they laid a solid foundation, and it is now incumbent upon us to continue to propel this Parliament to Nobler heights,” he said.

He proposed that the Parliament establish a Public Account Committee, which will be mandated to review audit reports submitted by the commission.

Hon Tunis promised that in exercising his advisory role, the parliament under his leadership would ensure that the community’s budget is dedicated to programs and projects that would impact positively on citizens at the grassroots.

“If ECOWAS state and government must be accountable to its citizens and donor partners, then the process must begin with ECOWAS citizens themselves. All monies must be scrutinized and the ECOWAS institutions must be run as efficiently and effectively as possible,” he said.

Speakers of the ECOWAS Parliament are rotated among member countries in alphabetical order hence it went from Mali, Niger, Nigeria, Senegal and now Sierra Leone. Based on this arrangement, by 2024, the next Speaker in the 6th Legislature of the Parliament will come from Togo.