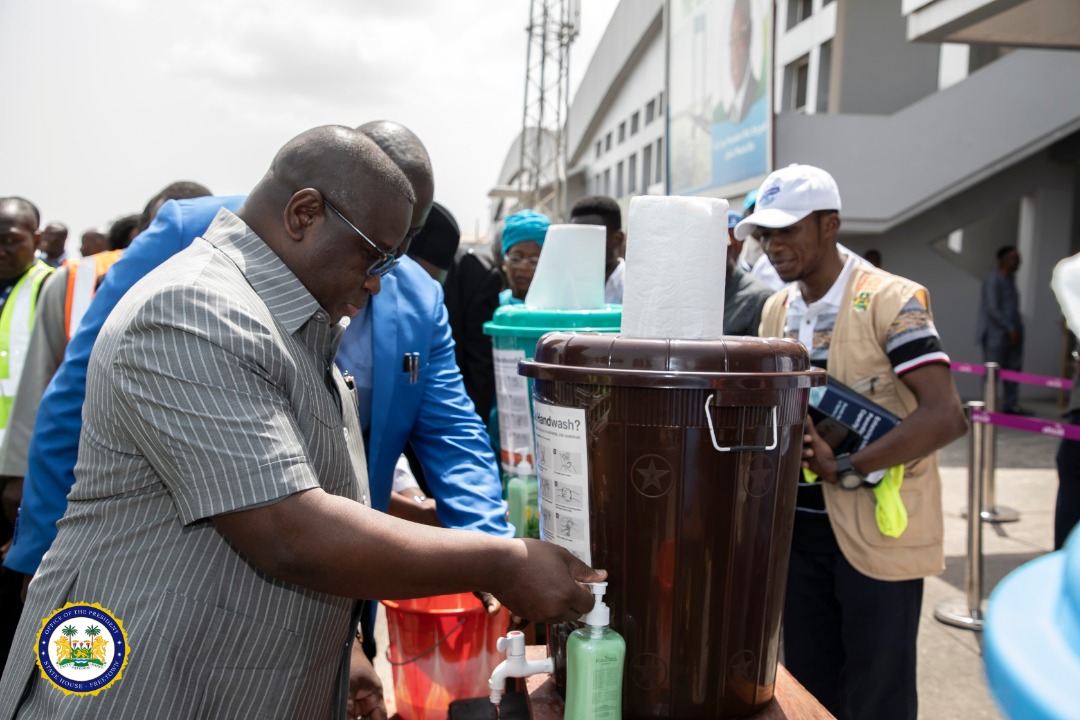 President Julius Maada Bio has today conducted a Coronavirus preparedness assessment inspection to different health facilities in the country.  The inspection exercise was done alongside some key government officials.

The inspection started at 34 Military Hospital in Freetown, then to the Lungi International Airport, Lungi Health center, Harmony Guest House which would serve as a holding center for suspected cases and the Chinese hospital in Lungi in Port Loko.

The president on his visit to the 34 Military Hospital thanked workers at the hospital for the good job they have been doing and said he himself would one day hope to assess the state of the hospitals readiness.

Addressing workers at the Lungi Airport President Bio started by stating the purpose of his visit. He said he was visiting to check on the country’s state of readiness for any Coronavirus outbreak, adding that the disease was already affecting other countries around the world, even countries that are wealthier. He said that Sierra Leone had gone through a similar outbreak before with the Ebola Virus Disease, noting that that should serve as an experience to prevent a similar disease from entering the country.

“Using our past experience from Ebola, we thought we should raise awareness about what is happening around the world and how we can secure our country against the Coronavirus. This airport is a major point of entry to the country, so you have to make sure the processes that have been established are adhered to. Those of you working here are at the frontline and you must put measures in place. I want us all to be more vigilant and work collectively to fight the virus,” H.E Julius Maada Bio.

Speaking at the Government Hospital in Lungi, the President said that he wanted to verify what had been done in the event of any possible outbreak as the nation is depending on its medical practitioners in case of an outbreak, adding that, that was why he was calling on them to be prepared. He also commended the Ministry of Health and Sanitation and the medical personnel for already putting plans in place.

“I want us to go into the mood of washing hands as frequently as possible, reduce handshaking and using hand sanitizers to make sure that the Coronavirus does not enter Sierra Leone. I am raising awareness so that we all can become fighters against the virus. We are putting plans to ensure you are all well-protected when performing your duty,” H.E Julius Maada Bio assured health workers.

His Excellency the President Julius Maada Bio said has was satisfied with the preparedness that had so far been put in place.

The Coronavirus started last December in Wuhan District in China and has since then reached some Asian countries and some African countries with a kill rate of about 3,000 people and 89,000 confirmed infections.