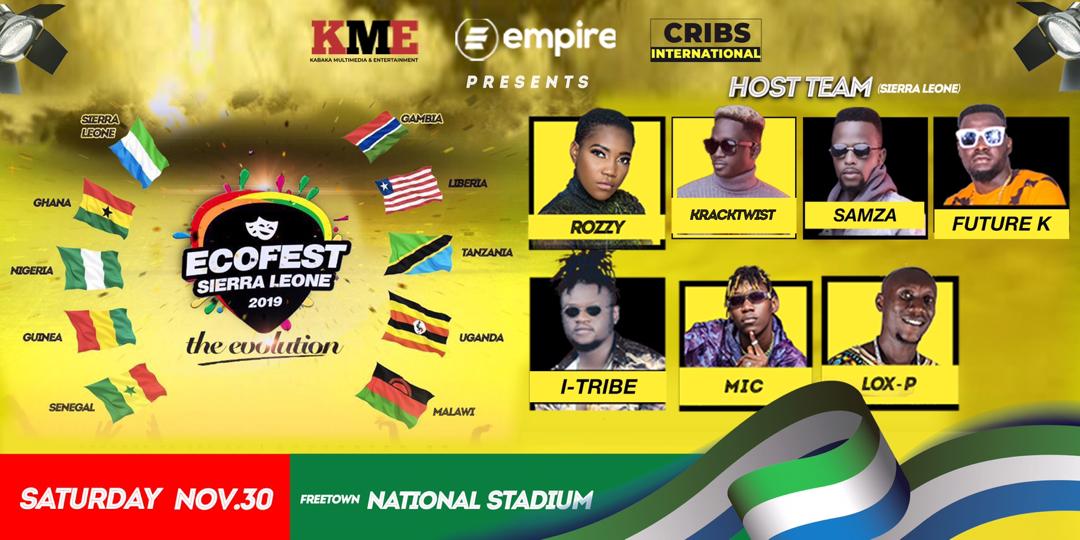 Ecofest musical concert which is an Ecowas musical event is set to hit the waves of Sierra Leone for the second time. The show which is scheduled for the 30 Nov would be featuring acts from different African continents.

Kabaka Multimedia Entertainment KME is the record label that founded Ecofest in 2018 by lawyer Abu Bakarr Turay, the CEO.

The artists that would be performing at the event are mostly from Ecowas west Africa and this year it’s going to feature act from the south and east Africa.

Thousands of music lovers turned out in thousands to support the event last year when it was introduced.

Kabaka says that he hopes to use music to help young people develop from raw to seasoned talent.

“With Ecofest, KME is uniting local talent with regional acts but our aim is to showcase what we as Sierra Leoneans can do when we have the right resources and the enabling environment,” said Kabaka, ceo kme.

Ecofest is bigger than just music, it is about cross border collaboration and cultural exchange for artists in West South, and East Africa.

While the region has experienced a surge in music quality and the internet has made it easier to share and receive music across borders, international shows are less common. Rarely will you find artists from as many as 10 African countries on the same stage.

This will be the second time it is hosted in Sierra Leone since its launch, it was hosted in The Gambia earlier this year.

The first edition of Ecofest “When Lions Roar” was hosted in Sierra Leone at the National Stadium last year. Over 30,000 fans filled the stadium to see headline acts Patoranking (Nigeria), Kuami Eugene (Ghana), and Patapa (Ghana). This year’s theme is “The Revolution. Artists from ten African countries will perform.

MCs for this year’s Ecofest are Brisk “Basket Mouth” Okpocha from Nigeria and our very own Phebean Swill.