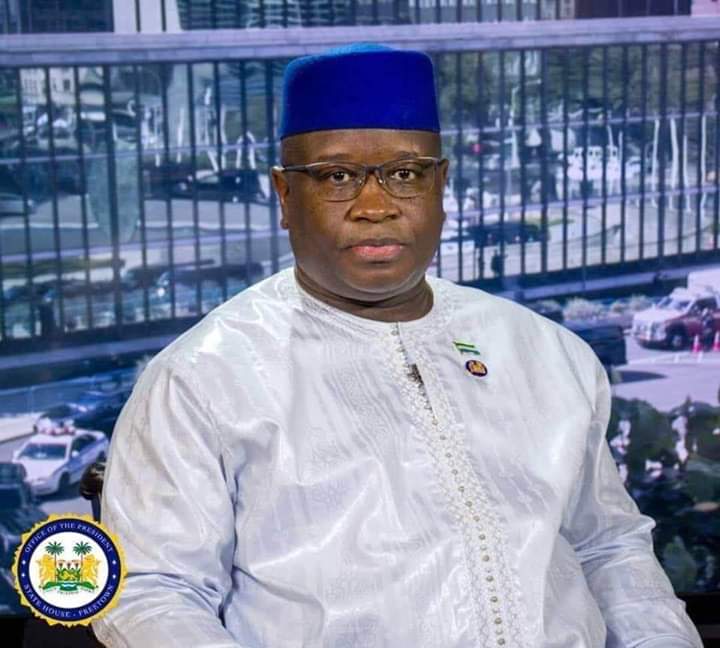 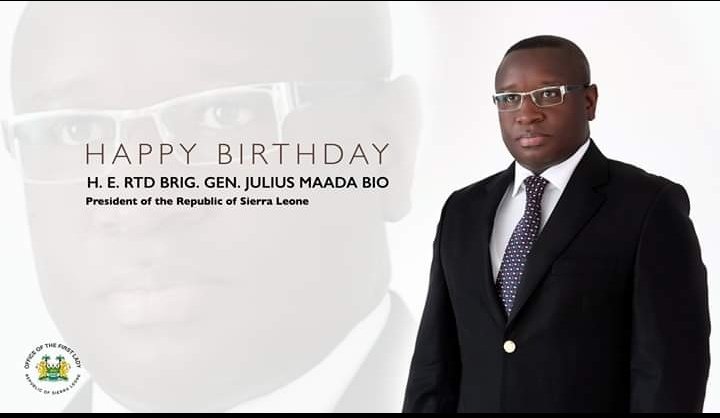 The fifth president of the Republic of Sierra Leone Julius Maada Bio turns 55 today, celebrities and politicians have taken to social media to wish him a happy birthday. His wife, the first lady Madam Fatima Bio, used her official Facebook page to post birthday wishes featuring an adorable photo of the president.

‘’May the good Lord grant you goodness, loving kindness and divine wisdom to lead this great republic on this special day and always.

Our dear president you are our chosen one, with a big heart for mama Salone. The people of Sierra Leone wish you a blessed birthday,” Fatima wrote. 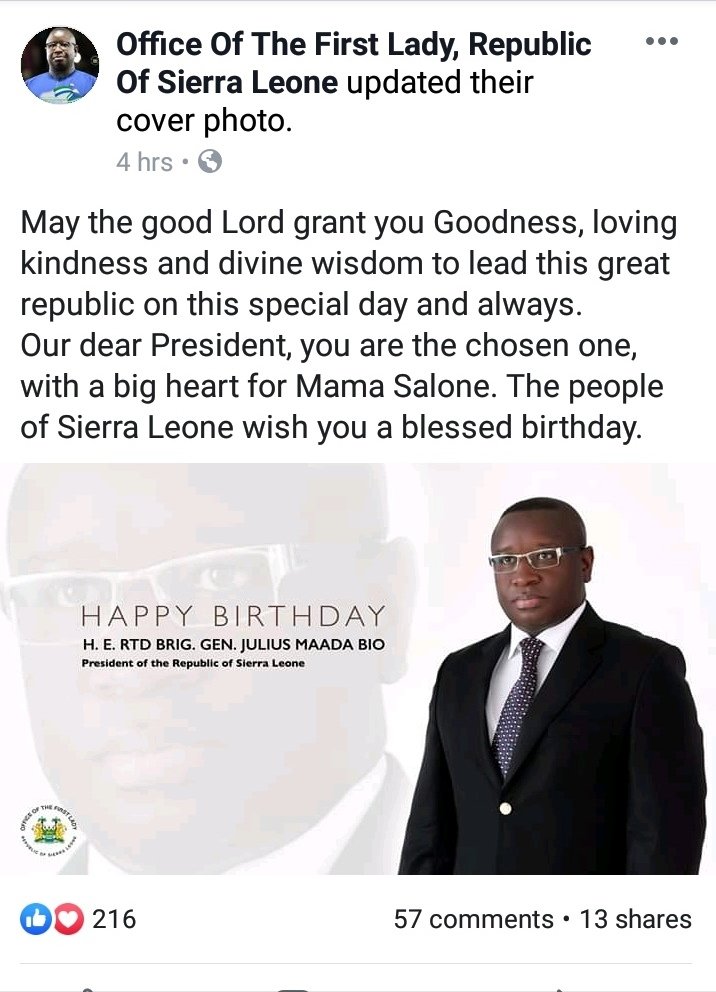 His Excellency President Dr Julius Maada Bio was inaugurated on the day of his birthday last year as the president of the Republic of Sierra Leone. Yusuf Keketoma Sandi, Press Secretary at the office of the president reminisced about president’s birthday by writing a poem which he said is dedicated to President Bio. ‘’This poem is dedicated to His Excellency President Julius Maada Bio as Sunday, May 12th Marks his 55TH birthday celebration.’’ Sandi titled his poem ‘’ODE TO THE PRESIDENT’’ and it reads,

“Your birthday arrives with great hope
Last year, you got inaugurated with anxiety
Today, we are out of the economic slope
Bintumani 3 will build a cohesive society

A year on, we have free quality education
Over 2 million children with their dreams
You have rebranded our great country
So Human Capital Development gleams

You increased salaries and pension
For the poor and workers, you care
Thanks to your leadership and dedication
And making your critics mere armchair

Improving the conditions of living for all
Every day, we see that as your passion
So just as you have done with football
‘Di gron dry’ will be defeated by your vision

On this your birthday, all we do is to pray
That our Lord will grant you wisdom
Good health and protection every day
And May our country be God’s Kingdom, ”

Vickie Remoe a popular figure and a successful entrepreneur took to her facebook and shared images of the president’s inauguration celebration last year, 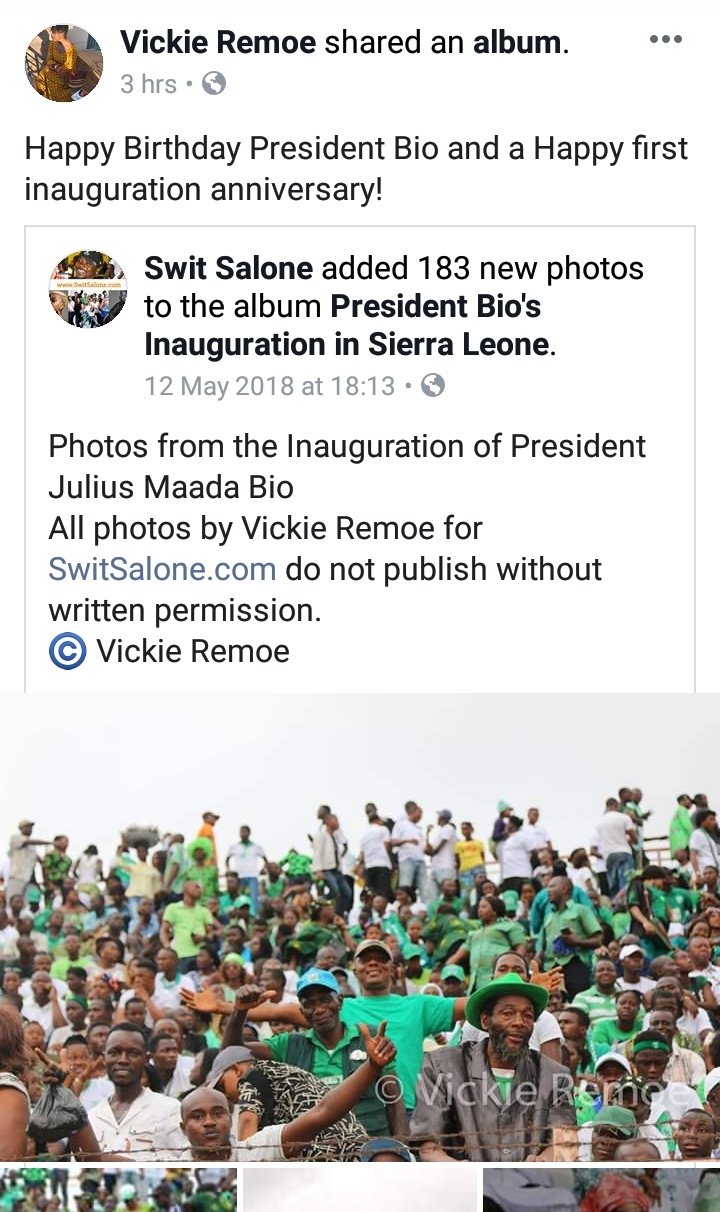 Julius Maada Bio (born May 12, 1964) is a Sierra Leonean politician, and the 5th and current president of Sierra Leone since April 4, 2018. He is a retired Brigadier General in the Sierra Leone Army and he was the military Head of State of Sierra Leone from January 16, 1996, to March 29, 1996, under a military Junta government. As the candidate of the main opposition Sierra Leone People’s Party, Bio defeated Samura Kamara of the ruling All People’s Congress in the runoff vote of the 2018 Sierra Leone presidential election with 51.8% of the votes to Kamara’s 48.2%. International and local observers declared the election free, fair and credible. Bio succeeded Ernest Bai Koroma as president, who was constitutionally ineligible to run for the presidency, having served the maximum term of office stipulated by the constitution.

Since taking office as president, Bio has overturned most of the executive policies of his predecessor Ernest Bai Koroma as he accuses his presidency of massive corruption, including allegations of millions of dollars stolen from the government treasury, mismanagement of the country’s finances and natural resources, and leaving the country in a terrible economic state. The Sierra Leone Ministry of Justice in Bio presidency has set up a commission of inquiries to investigate the previous government of Ernest Bai Koroma of alleged corruptions.

Bio has a Masters Degree in International Affairs from American University in Washington, DC. Bio is also a cadet graduate from Sierra Leone prestigious Benguema Military Academy. Bio is a Christian of the Roman Catholic denomination whilst his wife, First Lady Fatima Bio is a Muslim.

I think this is a great day for our President and the nation as a whole, as he celebrates his 55 birthday SwitSalone wants to wish him a happy and a successful birthday celebration.

It might look like any other day but it is far more than just another day because this is the day on which a blessed baby was born with a destiny that is entwined in the future of a nation. Our nation!

You rose above the early adversities of your birth to pursue a path that was marked with bigger challenges.
You ignored your own personal pains, at every stage. You threw caution to the wind on several occasions to grab destiny by the very throat!

Your care for this nation and your love for your people is real and unmistakable, and the people love you back in their many different ways. It is a love that shines way beyond the special spark of the ballot box. It is a love that exists deep in the hearts of a long-suffering people who at last have found the man they know will never let them down!

You carry the hopes of a nation and the dreams for the future.
It is a very heavy load for sure, but you have been carrying this national load with commendable courage and admirable ability and throughout you have stayed steadily focused in spite of all the many possible distractions that have been thrown your way.

We pray for your health and for your wisdom to carry this nation further and further to the heights of your vision.
Our national success lies in your human hands. May that hand be divinely directed and supremely protected at all times! AMEN!