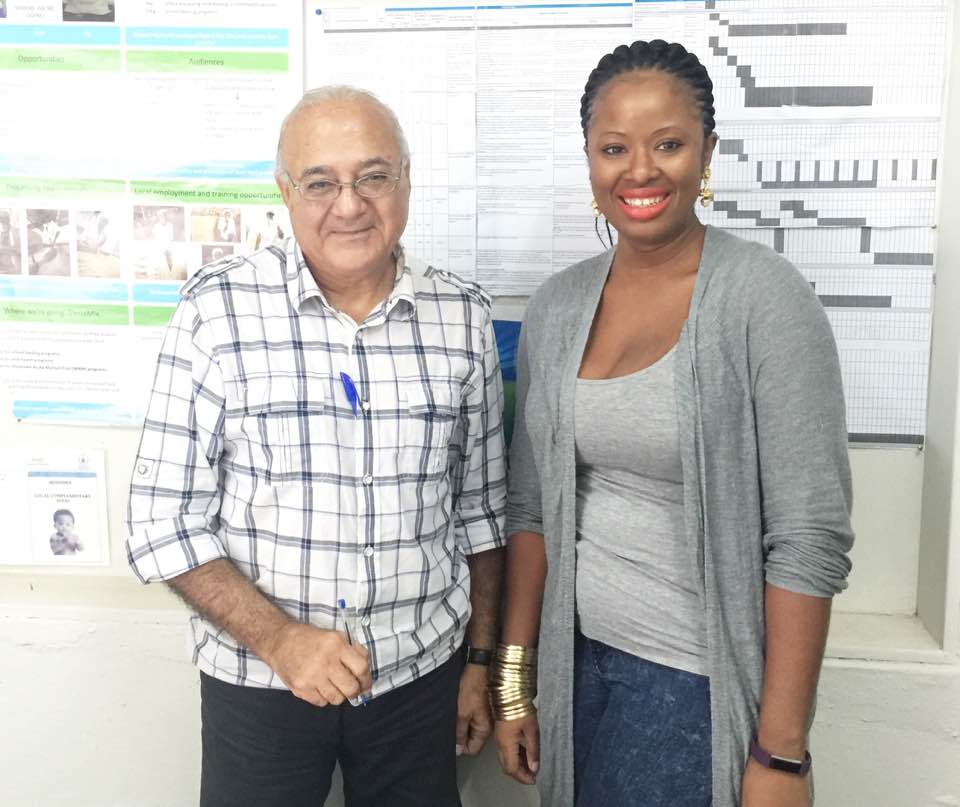 It has been exactly one year since Dr. Bahsoon signed a contract with my company to market his baby food company, Bennimix. He said at the time that SOBA an organization that supports businesses in Sierra Leone would primarily be responsible for our retainer fees and marketing activities. He further added when we signed, that even if SOBA didn’t pay he was fully confident that at the discounted rate that I gave him, he would be able to manage payment.

We signed a contract in early August. He paid the first quarter fees (late but he paid). We began working on marketing Bennimix. We submitted our work plan to him and his team at SOBA, they approved and we went to work. We designed a brand new brand guide for Bennimix, printed new marketing materials for them, we did market research, we developed a campaign which I dubbed “Healthy Baby, Happy Mom”. I flew to Freetown in person to launch the campaign at a date and venue of Dr. Bahsoon’s choosing on 19 November during the second quarter of our agreement.

When we sent him the invoice for the second quarter which had already begun in the first week of November he said he would settle as soon as SOBA refunded him. He said nothing about being dissatisfied or wanting to discontinue service. Every week until the end of the year he said he was waiting on SOBA.

Thinking it was irregular for SOBA to not have refunded him, I contacted SOBA and was informed that they had refunded him. When I confronted Dr. Bahsoon about the refund already having been paid to him, he said they had only partially refunded him. Dr. Bahsoon claimed that SOBA staff were incompetent and that they had tripled his overheads both at the factory in Bo and in Freetown without wanting to pay up. He said the people working on his project were inexperienced and had never run a business before. “Small small pikin dem, dem noh sabi natin”, was what he said.

Then he went to SOBA and told them that we hadn’t done the work. He told them that he didn’t know what we had done to deserve the payment. The team there took his side or so it would seem. When I got wind of this I contacted Dr. Bahsoon via email and told him that if he was unhappy with the service he should say so and cancel the contract in writing according to the agreement we had signed. He said he was happy with the service but that he was going through financial difficulties as a result of the limitations brought on by his work with SOBA. He claimed they were forcing him to provide mountains of paperwork before they would fully refund what they had agreed to pay. He said “even way you spend pan carpenter dem wan see invoice” (even if you pay a carpenter they wan to see an invoice).

One of the SOBA project officers who had been present in all our meetings and dealings, told us at a meeting that they were hoping that we would accept to receive payment post completion of the contract at the end of the quarter. As this was not in our agreement I refused. I made it clear that any change requests to the agreement had to be done in writing and that the contract did not make any stipulation for the kind of payment schedule he was requesting.

I flew to Freetown and Dr. Bahsoon asked for a meeting. In the meeting which happened on 24 January he went on an hour long rant about SOBA again. He recounted how they had tripled his overheads. He said he was even refusing to attend meetings with them when they summon him because that’s how tired he was with the whole agreement. It seemed to me that Dr. Bahsoon had hoped he was getting a free flow of cash from SOBA with no checks or balances.

When I asked him at the meeting (which he requested I attend alone but I brought my operations manager. He always wanted to keep things just between us but I always copied everyone involved) to cancel the contract he said we didnt have a problem and he had no complaints he just had financial issues. He showed me documentation of a new order from Hellen Keller International for his power mix cereal that he said would bring him cash that he would then use to settle. He asked that we hold off on everything and give him 2 months until 24 March to get his act together.

Those two months came and went with no payment from him. Instead in emails he came up with ridiculous and laughable reasons why he was now (4-5 months since we sent the invoice) unhappy with service; i.e. that he signed a contract with “me” and yet I sent my employees to do the work. He said and I quote “your charisma” is why I signed you. I told him that I would not tolerate any attempts to smear the competence of my staff. I also  told him that he signed with my company and he didn’t hire me personally. All our contracts list the team members who will work on each client’s campaign and he was aware of this from day one.

It has been a year since we signed that contract and in addition to the late fees Dr. Bahsoon owes me over $10,000. When a lawyer wrote him a letter requesting payment, his lawyer wrote back and said he wasn’t going to pay because we didn’t do the work. I had the option to go to court after that but chose to close my operations in Sierra Leone instead. A friend said I should have taken it up with the Lebanese community because apparently that is where you go when you have a dispute with someone of Lebanese ancestry. I didn’t.

Instead I’m opting to go public about our dealings. Since we do not have a Better Business Bureau in Sierra Leone this will have to do. After I recounted what happened to me in my dealing Dr. Bahsoon I heard three other separate stories that also went sour in a similar vein. If any of them had gone public re their business gone bad with Dr. Bahsoon I would have been more cautious and or chosen not to work with him at all.

I did not approach Dr. Bahsoon looking to sign Bennimix as a client. First someone at SOBA reached out to me on Facebook and later Bahsoon himself sought me out. He wrote to me and asked to meet with me. He said that under ordinary circumstances he could not afford to engage my firm but because of the funds he was to get from SOBA he could. This is the only reason why I actually did business with him. I thought his money was good because I believe SOBA to be good. However once things went South with Bahsoon the team at SOBA who had attended all the meetings we had with him and had been involved in everything once the contract was signed all turned to mumu. Instead I heard whisperings from their staff trying to get me to hush hush on the matter. Dem clearly noh sabi me at all. One even said I should be careful or that my reputation would be spoilt. So the guy who broke  contract, lied, refused to pay me his reputation should be left in tact but mine would certainly be spoilt if I spoke out.

I take a lot of pride in what I do but most importantly I care about my clients. If Dr. Bahsoon had ever in all honesty reached out and said he couldn’t afford our services period, I would have cut my losses and moved no wahala. But the lies, and the attempt to manipulate and then smear me and my staff were completely uncalled for. As with most things though I guess he thought I would just become another victim of his 419ology who would go quietly and sumu sumu into the dark. I will never get my money back and thats okay but if anyone ever wants to do business with him and Googles his name hopefully they read this and go in with their eyes opened like a mountain fat foot.

To end I will like to borrow the wisdom of our ancestors when they pronounced that “Monkey noh day lef in black an.” If Dr. Bahsoon can refuse to pay me, and attempt to smear my company and staff in the process he could do it to you. A monkey in a lab coat is still a monkey. A monkey in Lebanon is to a monkey from Sierra Leone. All monkeys are monkeys. A monkey will be a monkey.