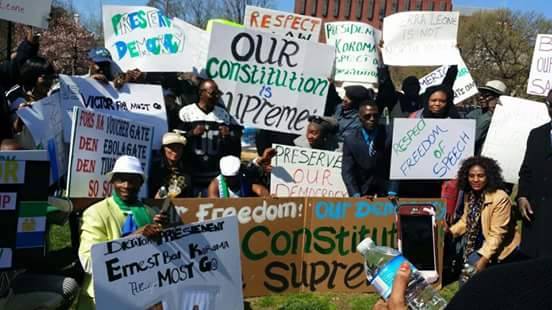 The removal of Sam Sumana from the Office of the Vice President in Sierra Leone has sparked a wave of anti government sentiments and civil protest both on social media and in the diaspora. This along with parliament’s attempt to bury the now two month old Auditor General’s Ebola Funds Audit Report in committee meetings have caused many Sierra Leoneans (especially those living abroad) to speak out against the President, and members of his government.

Last week leaders of the nation’s worst hit by the ebola outbreak (Sierra Leone, Liberia, Guinea) were invited to Washington D.C. for meetings at the World Bank and US President, Mr. Barack Obama. Sierra Leone’s President, Mr. Ernest Bai Koroma was in attendance at the meeting with a reported delegation of 21 officials.

Before and During his visit a large group that calls itself the “Concerned Sierra Leoneans” protested in front of the White House at Lafayette Park. Later in the week, they found out when the President was to arrive and a small group made their way to Dulles Airport with placards, and during the World Bank sessions an estimated two hundred protestors chanting to drums again registered their disapproval of the President, the management of the ebola funds, and the removal of Sam Sumana from Office. The protests at the World Bank were significant enough to warrant roadblocks and closures in DC.

These demonstrations are a first of their kind in Sierra Leone’s post war history and they mark a turn in the Presidency of Mr. Koroma who in recent years was welcomed across the diaspora by large gatherings of Sierra Leonean citizens who followed him to his hotels, hosted dinners for him, and were eager to hear from him and or his emissaries at town hall meetings. For now however, it seems the President’s support base in the diaspora has been reduced to members of the APC North American branches, his friends, and employees of state at the various missions.

In response to the Concerned Sierra Leoneans, the APC also organized its supporters to come out to planned protests to show their support for President Koroma and his government. At the World Bank, Cocorioko Editor Ambassador Kabbs Kanu, was there with a brass band and he led a group calling themselves Sierra Leoneans for Peace to Lafayette Park. For every social media post or rant against the President regarding the ebola funds or removal of Sam Sumana the government’s official and unofficial communication units, freelance spokespersons, and compensated writers and supporters publish alternate versions on stories, and actualities. This makes for very active exchanges, posts, and counter-posts on Facebook, and the now famous Whatsapp discussion groups.

Social Media is now central to political discourse and dissent for Sierra Leoneans on both sides of the fence. It is especially useful in organizing these demonstrations and protests across state lines. Concerned Sierra Leoneans who also has supporters in the UK  have planned another protest at the United Nations Headquarters in New York on Sierra Leone’s Independence Day.