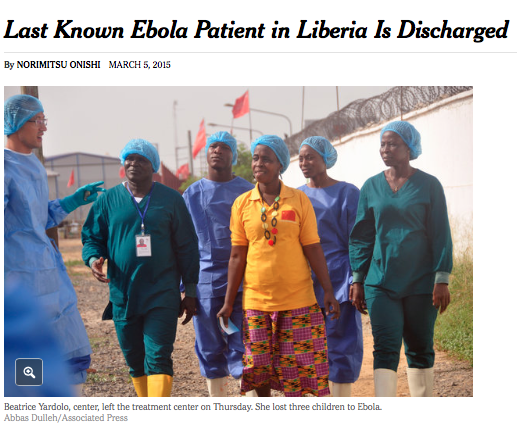 Beatrice Yardolo, a woman who lost three children to ebola has just been discharged from an ebola treatment facility in Liberia. She is the last known ebola case in the country. In the last week Liberia recorded zero cases of ebola while her neighbors in Guinea, and Sierra Leone continue to battle the disease.

“The authorities are still tracking more than 100 people for possible exposure to the virus. As of Thursday, no new cases of Ebola had been confirmed inside Liberia for the past 13 days, Mr. Nyenswah said.

If no new cases emerge, the epidemic in Liberia will be considered over officially on April 4, or 42 days after the last known infection. The 42-day marker is twice the longest incubation period for Ebola, 21 days.

Liberia has suffered the highest number of deaths during the epidemic, with 4,117 recorded victims, according to the World Health Organization. More than 9,800 people have died in total.”