Sometimes I get disgruntled when I watch MTV Base or Channel O and I don’t see any of Sierra Leone’s artists. When you haven’t broken into the Afrobeat world domination you start to wonder if perhaps the issue is that we don’t have good music, or good production. Today as I scrolled down my iTunes thinking of what to play, Dead Men Don’t Smoke Marijuana popped into my head.

I first heard this album in 1997, it was in my grandmother’s CD collection, sent to her by my mom or my uncle I can’t remember. I pushed in the CD and the sat mesmerized by Kpindigbee and every other record on the album. It was as brilliant then when it was released as it was this morning.

So if you don’t already have this one and you’re looking for something to reassure you of all that is the wonders of Sierra Leone Music you should reconsider this. You will not be disappointed. Below are two albums from S. E. Rogie definitely worth he download

The video above is of My Lovely Elisabeth from S. E. Rogie’s  “Palm Wine Guitar Music (The 60s Sound)” available for download here: https://itunes.apple.com/us/album/palm-wine-guitar-music-60s/id476207165. If you don’t know this song we might have to take back your Sierra Leonean passport. 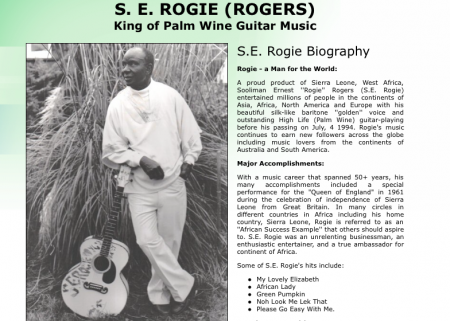 S.E. Rogie was born, Sooliman Ernest Rogers, in 1926 in the town of ”Fonikoh,” which is located in Pujehun, the southern district of Sierra Leone, West Africa.

A proud product of Sierra Leone, West Africa, Sooliman Ernest ”Rogie” Rogers (S.E. Rogie) entertained millions of people in the continents of Asia, Africa, North America and Europe with his beautiful silk-like baritone ”golden” voice and outstanding High Life (Palm Wine) guitar-playing before his passing on July, 4 1994. Rogie’s music continues to earn new followers across the globe including music lovers from the continents of Australia and South America.

Rogie died on stage in Russia. Many people will say: ”I want to die doing what I love.” In the case of S.E. Rogie, this was literally true. Many months before his death at age 68, Rogie had undergone a by-pass heart surgery.

Zainab Sheriff and fans of the Big Sister...