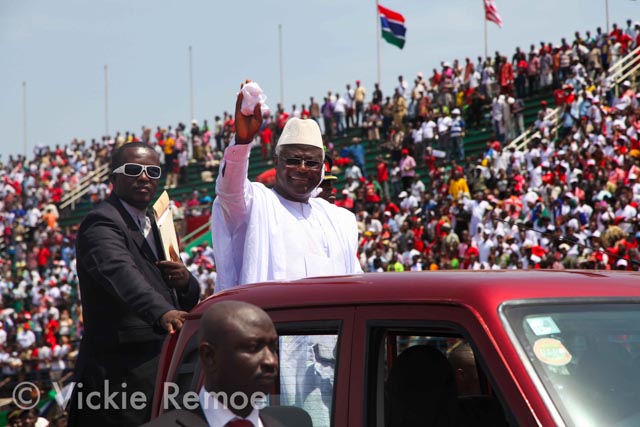 When Sierra Leone’s president pulled into the national stadium in a red half back SUV the crowd though smaller than his first inauguration roared. They had been waiting for 4 months for this moment. President Koroma was re-elected for 5 more years back in November. There were security concerns with some worrying that the election would turn violent. However this was not the case. The elections came and went with no major incident. Observers said it was free and fair. The international community was shocked. Those who have been in country since the 2007 elections weren’t. Sierra Leone has turned a curve and it was under the leadership of President Koroma. Often accused of being too “nice” he delivered on many of the promises he made in his first term.

While Koroma’s first 5 years in office was marred in multiple corruption scandals and other controversies, he has led the country to record growth and infrastructural development. The roads even those in the interior are better, the streets though not perfect are cleaner. Sierra Leone is buzzing with potential. Foreign direct  investment in iron ore, agriculture, and manufacturing have gone from non-existent to real. The government still needs to learn to negotiate better tax deals but this too is part of the process of development. Gains in power supply have gone down significantly after the Bumbuna dam malfunctioned back in November but up until this point,  the people of Freetown enjoyed a significant improvement in electricity.

There is still plenty to be done to bring Sierra Leone up to regional development levels.  Sierra Leoneans are starved for opportunities of all kinds. Some 800,000 young men and women are without work, or underemployed. Compared to youth in Ghana or Senegal they lack skills. Access to the internet and technology has been very limited. If the government can not create jobs then it needs to create an enabling environment for young people to run their own businesses. Young people have little or no access to credit and they don’t have the means to scale up once they’ve already begun.

President Koroma says that he will dedicate his second term in office to the youth. He has created a separate ministry for Youth to set policy to be implemented by the National Youth Commission.

If his first 5 years in office are a guide for the next, then we can expect lots of youth related development activity. But it also means that the Anti-Corruption Commission and the people of Sierra Leone need to be more vigilant to make sure that these efforts don’t go to waste in the foreign accounts and multiple construction projects of the political elites.