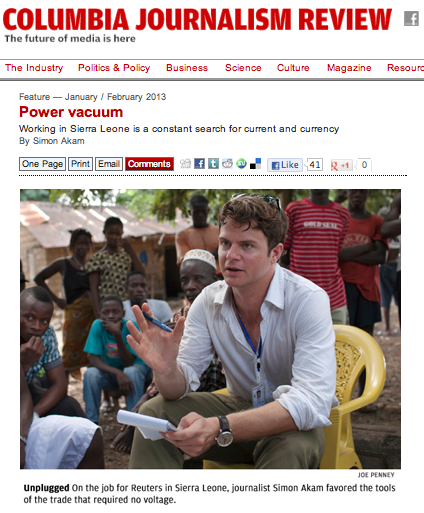 Simon Akam, the resident Reuters correspondent in Sierra Leone has left after serving what probably felt like a 2 year sentence. In a recent post in the Columbia Journalism Review Simon reflects on his time in West Africa as a journalist. My favorite part of the 2 page post is where he explains what he calls the”Freetown conundrum” capturing the main reason I now call Accra, and not Freetown home. Simon perfectly captured that ever recurring moment where EVERYTHING in Sierra Leone seems to be conspiring against your sanity.

Sometimes the individual dysfunctions of Sierra Leone collided into a wholesale collapse of possibility that I will call here the “Freetown conundrum.” The best way to explain it is to describe a hypothetical variant of the type: You awake. It’s 91 Fahrenheit in the shade, and the humidity is 87 percent. The sheets are stinking with sweat and insecticide. The cell phone’s battery is about to die. The generator at the office has broken, and even before it went down, the Internet collapsed. A diesel shortage means there’s no fuel for the generator at home. The ATMs are offline, so there’s no cash to get to a hotel to use its communications equipment. The only realistic option is to go back to bed, thwarted again by West Africa. However, even that is not an option, as it is now 95 in the shade and there’s no power for the bedroom fan. In situations like this, I periodically feared I might go mad.

Often I felt Simon was a bit out of touch with the realities on the ground and called him out on it. But at the end of the day he was really the only credible source of information coming out of Sierra Leone once I relocated to the USA. I also became a lot more appreciative of Simon’s work once I took the plunge myself and went to the J-School. His piece, “The Vagabond King“, a profile of former head of state Valentine Strasser is still one of my favorite profiles ever.

As we sat at Country Lodge Hotel last November both covering the same elections beat Simon looking as weathered as ever confessed that he was looking forward to heading back home. He feared that a possible runoff would keep him in the country longer, missing Christmas with his family.

Luckily, that didn’t happen and Simon is back in the UK.

And we are happy to report that this piece in CJR has no mention of the word “ramshackle”.

A most note worthy achievement if you ask me 😉

Diaspora Talk: On gifts, giving, and ‘wetin you...

Reflections on my visit to Mali as new...