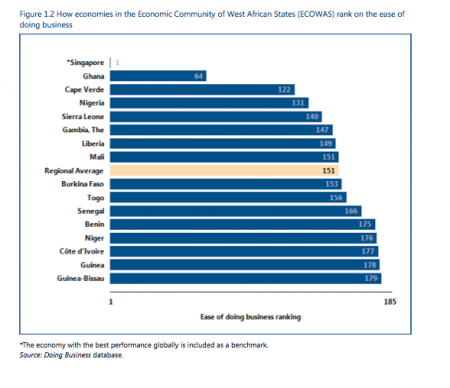 According to the World Bank Doing Business 2013 Report, Sierra Leone and Liberia have surpassed the regional rank for ease of doing business in West Africa. The annual report assesses the ease of doing business for small and medium entrepreneurs in their host economies. It looks at several indicators compiled from Africa and beyond including the number of days its takes to register a business, number of procedures  to registering property etc. Sierra Leone and Liberia have improved on their doing business record by implementing taxation and legal changes.  Liberia ranked 157 in the doing business report for 2009. Four years and the country of 4 million is now ranked 149 and with a rank of 38, it is the easiest place to start a business in all of West Africa. Sierra Leone which ranked 156 in 2009 now ranks 140 in the Doing Business rankings. Regionally Sierra Leone has the best rank for protecting investors. But compared to Ghana which scored 64 as the easiest place to do business in all of West Africa, both countries would need to half their rank to catch up to this emerging middle-income economy.

Sierra Leone qualifies for the African Cup of...

the Boys at Bumbuna