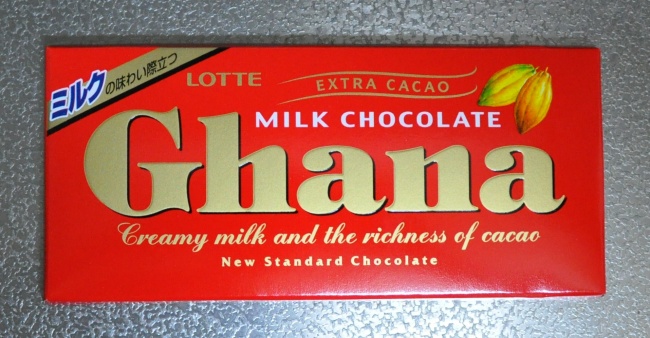 This chocolate bar is called 'Ghana but made in Japan

Cocoa traders who sell in Ghana will now earn 25 percent more than their Ivorian counterparts. A Reuters article suggests that this will lead to cocoa flight in neighboring Ivory Coast who has had to fix its prices after a decade of liberalization to boost its local cocoa industry.

Ivory Coast is historically the world’s number 1 cocoa producer but months of post-elections conflict in 2010, higher transport costs to Abidjan, and aging plantations has given Ghana a more competitive edge. Higher cocoa prices next door mean that Ivory Coast will lose more tax revenue as cocoa beans taken in sacks are sold in Ghana.

Industry estimates put the real size of the 2010/11 harvest in Ivory Coast at around 1.7 million tonnes against the some 1.5 million tonnes that were officially declared – suggesting around 200,000 tonnes were smuggled out unrecorded.

This month the International Cocoa Organization (ICCO) priced a ton of cocoa at $2438. At today’s prices that means that half a million dollars worth of produce left Ivory Coast untaxed. Togo officially exported 120,000 tons of cocoa last season but traders say that only about 10,000 tons of that was grown locally. The region as a whole benefits from smuggled Ivorian cocoa. One trader said that Togo is especially exposed to the international market.

“The real problem is not what the price is in Ghana, it’s what the world price is, especially if the traitants are not happy with what they are paid… for them there might be a strong incentive to send cocoa outside of Ivory Coast”