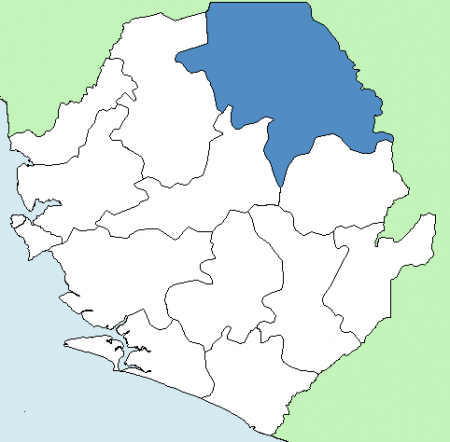 Despite the Sierra Leone government’s efforts under its Free Healthcare Initiative, mothers in the rural parts of Koinadugu district have limited access to the facilities that have halved the nation’s maternal mortality rates in just 2 years .

According to claims made by the town Chief of Kambalia Section, Alpha Salifu Kamara, of Wara-Wara Bafodea Chiefdom in constituency 47, Koinadugu District, has one medical facility.

“Many people in the chiefdom walk up to 35 miles to access the only heath care facility in Kathalia Town,” he said.

Town Chief Salifu Kamara says that “most of the maternal deaths go unreported because of the poor road network”. He said a population of almost 25, 000 inhabitants in 42 villages, Kambalia has a makeshift health care center and a nurse.

“The shortest distance to access a health facility is six miles, so youths normally transport the sick on hammocks to health centres,” he said, reiterating that three out of every five patients die on the way. There are no actual records to confirm these numbers. But head nurse and sole health practitioner at the chiefdom’s Kamukeh health center, Mary Kamara, says many pregnant women have died since the introduction of the free healthcare initiative, citing a 36-year-old mother named Jeneba Mansaray, whom she said died because of the distance to access the health facility.

“There are so many challenges facing nurses working in remote areas,” she lamented, adding that poor outreach mobilization due to lack of vehicles frustrates their efforts.

The Public Relations officer of the Ministry of Health and Sanitation, Jonathan Abass Kamara, said Koinadugu is one of the areas in the country with a very difficult terrain. He said there are areas that are very difficult to access even with motorbikes, adding that as a ministry they have established ‘Birth Waiting Homes’ so that in situation where the distance is a problem, pregnant women could be easily provided with care. He denied assertions that the district has the highest maternal and child mortality in Sierra Leone.

“Koinadugu is doing extremely well in terms of the fight against maternal mortality,” he noted.

The District Medical Officer of Koinadugu District, Anthony Sandy, said there were no reported cases of infant and maternal deaths since April to May this year, but added that two maternal deaths were reported in January and February with one in March. He however disclosed that the chiefdom is 55 miles from Kabala Town with poor road network and only one ambulance. He said the reason for the reported cases of maternal deaths are due to late reporting to health facilities, and that pregnant women often prefer to visit traditional birth attendants (TBA) rather than go to health care facilities.

With the introduction of the free health care initiative the Ministry of Health although faced with a shortage of midwives banned traditional birth attendants. A move that has been heavily debated by health care experts both in support and against the decision. Remote communities like those in Wara Wara Bafodea chiefdom suffer the most from the shortcomings of the free health care initiative. Sierra Leone still only has 78 midwives, and 6 obstetrician to service a population of 6 million people.

By Alpha B. Kamara in Freetown