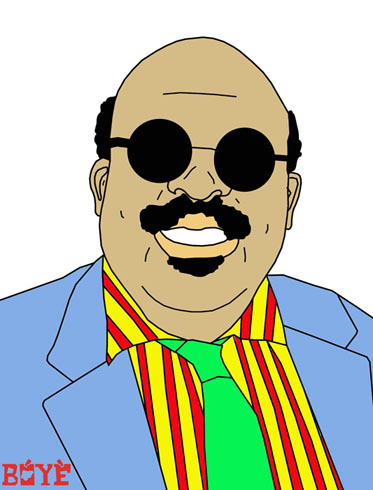 I have been doing my best to stay clear of that story about the Minister pikingate but it just wont go away. I tried to keep quiet partly because I  was recently accused of being a purveyor all of all things negative a la Sierra Leone. But dis wan noh go pass make ah noh rub mi mot pan am after all ah don gi chance make all man tok.

How many people were actually shocked or surprised that a deputy minister who may be married has several girlfriends that he courts during office hours and in his office? I cant talk about the rape, I don’t know about it. What I do know is that young girls are pimped or self prostitute on the regular, and this is the norm. And by prostitution I’m not talking about the girls on Lumley Beach road either. I mean koro koro daylight classroom to office-chair middle of the day raray.

I mean the trade of sex for favors. It starts small from soft drink to top up for the phone. Then it moves up to phones, and later perfume, and when you enter the big leagues, a car, or a house rented for you. There was a song a couple years ago by Dry Yai Crew about a Big Man who was caught pwellin a small pikin, in that song turned out to be an ‘honorable’. I cant tell you how many times we speculated about the Ministers and honorables that it could apply to. Dem bin too bohku foh cont. The song most accurately chronicled the pay as you go sex trade culture. Down to nouveau riche attachment to SUVs and the dirty things they get up to with the pikins dem inside those heavily tinted government cars. Though it is not only government officials who pwell pikin infact any man with a little cash to spend can pwell a pikin. Mothers and brothers pwell pikin too. If you are a young girl, and are attractive the expectation is that you should start bringing something in to the family. The thing is girls are a commodity and grow up understanding that their greatest asset is quite possibly their ‘tabulay’.

Granted ‘Tabulay’ was banned when we were kids but who didnt know the words?

Talk about all the wrong things to teach a girl right? Your vagina is your everything even your bank book, and your passport? Yup thats Salone for you. 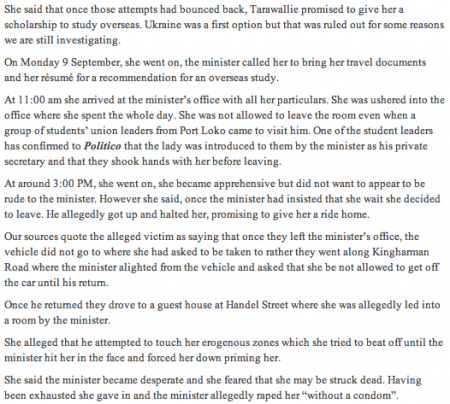 Anyway as the story goes about the Deputy Minister and the student pikin that he allegedly pwelled. He asked her to come to his office for a scholarship. She said the minister was her friend’s boyfriend. She said he had sent her vulgar text messages before he invited her to her office. The victim said she waited at his office all day and wasn’t allowed to leave. The minister forced her to go with him to a hotel room, and he raped her in there. When the pikin went to report at the police station the minister said they he didn’t rape her that she was his girlfriend. He admitted that they did have a scuffle, but the palaver was because  she wanted money and he refused to give her.

If you’ve spent enough time in Sierra Leone then like me you both believe that this was a case of pwell pikin business as it was a showing of all the ills monering Salone.

ILL 1: Nepotism. Those who get scholarships in Sierra Leone have to personally go see the Minister and by personally you see what I mean.

ILL 2: Corruption. People believe that they can get things they did not work for. Di gyal go see di minister for scholarship way e probably know say e noh deserve.

Talent needs no introduction: Sampha Sisay of London by way of Sierra Leone

A look at Sierra Leone’s road to Telecommunications...

Is Sierra Leone’s President using his assistant to...