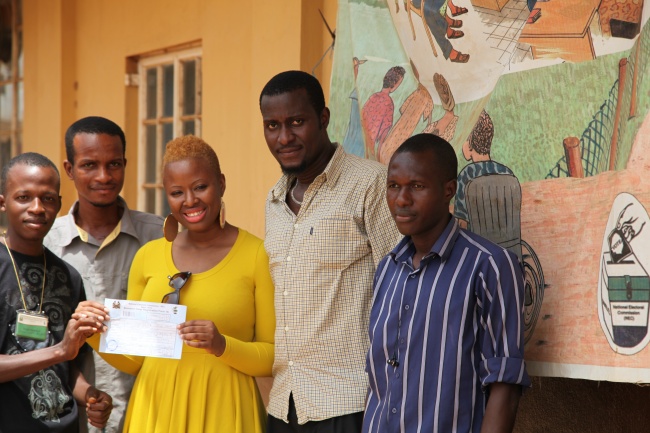 Sierra Leone’s national biometric voter registration has closed after a 3 month exercise led by the National Electoral Commission (NEC). In a press conference last week the NEC Commissioner Miatta French announced that over 2.5 million Sierra Leoneans had registered to vote across the  country.

When the registration process began back in January, several concerns were raised in the press. Some questioned how rural communities would cope with powering laptops during black outs, while the opposition political party claimed that the government was bringing in ex-combattants from Liberia and other places around the country to register in SLPP strongholds. Many questioned NEC’s capabilities but as I discovered when I went to register to vote last week, the was actually quite simple.

At a voter registration center at Technical Secondary School in Congo Cross a flex banner hung outside of a classroom. Inside, a handful of NEC trained staff were tasked with taking personal details first by hand and later input into a computer database. A female police officer sat on long bench as I entered the room. She was the only woman on a staff of five present in the center.

Not speaking to anyone in particular I explained that I had come to register. A young man sitting next to the door pulled out a wad of registration sheets and asked me to sit down.

He asked me my name, date of birth, address, and the names of both of my parents. I asked if I needed to provide an I.D. and he said that I didn’t need to. I wasn’t sure if that was because he said he knew me from my work on television or because I spoke krio.

After he took down my details, he handed the sheet to a light-skinned fullani looking fellow who began to input the details into a laptop. The computer was connected to a generator outside in front of the building although they had power from the national grid. I was finger-printed and then asked to sit in front of a web cam as my photo was taken.

I walked back to the computer and saw that my image had appeared along with the details I had provided earlier. The entire process took less than 10 minutes. I was given a receipt and told that NEC would make public announcements when it was time for us to collect our voter registration cards.

The use of the new biometric cards mean that each person’s details will be stored in the NEC system for future use.

As a Sierra Leonean currently living in the US I was surprised to find that many flown home to register to participate for the November elections. By all accounts this year’s elections will be the greatest test of Sierra Leone’s transition to a peaceful and democratic country.