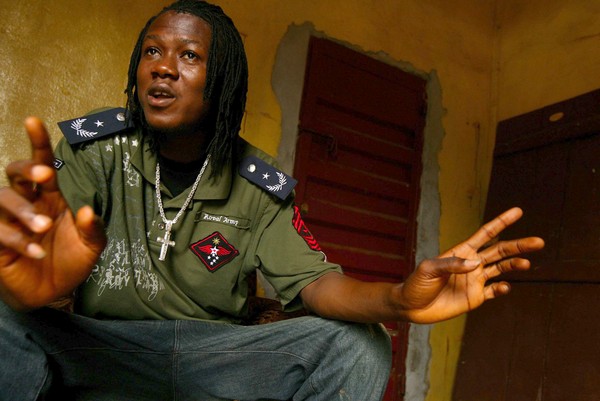 UPDATE: Earlier today we reported that Innocent had released a new song in support of the SLPP.  On his facebook page however, Innocent says that there is “photo copy Innocent”, an impostor trying to sing like him. This has left many questioning the authorship of “Mr Fine Boy”.  Did the SLPP hire this impostor to compose Mr Fine Boy, or is Innocent refusing to take authorship of Mr Fine Boy because he fears being pressured? Listen to the original “Gi Dem Notice” and “Mr Fine Boy” and you tell us if you know who the artist is?

Sierra Leonean singer Innocent aka “the political genius”, best known for his 2007 pro-All People’s Congress single ‘Gi dem notice’ has released another politically inspired song. However, in this new track, Innocent is singing against the APC government and in favor of the current SLPP opposition leader Maada Bio.

Using the same beat and rhythm of ‘Gi dem notice’, Innocent is now calling for change.

Later on in the song Innocent talks about the rising price of rice, corruption, cronyism, and a government that he says has disappointed the people. Several times during the song he also references lines from Emmerson’s “Yesterday Betteh Pass Tiday”, “Borbor Belleh”, and “Borbor Pain” .

Many of the issues brought up in the song are factual to some extent. But one line that will resonate with many poor and working Sierra Leoneans is the simple truth that “wan bag rice na 160,000”.

It will be interesting to see how APC supporters react to Innocent now that he is no longer singing their party’s praises.

I’m sure that in a matter of weeks another artist will release a song to counter this one.

As long as we restrict di call name and discourse to music and we can all accept different political views, den leh di case wam!