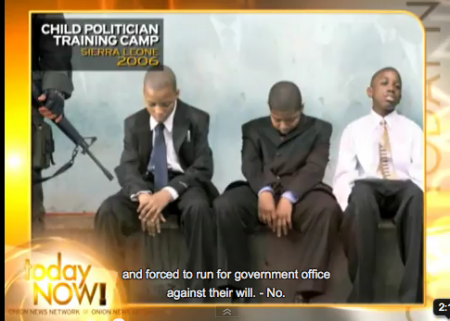 Young innocents thrust into the lime light with only a sex tape scandal to free them from bondage. These poor children are made to smile and wave, going from village to village kissing babies they don’t even know and for what? Simply to win votes. And it doesn’t just happen to young boys, the girls are also taken from their villages and forced to be child politician wives. Luckily they can come to America and write about it making all of us glad that we are not from a place like Sierra Leone where little boys and girls lose their childhood to the deep dark world of child politics.

This parody is totally hilarious. The usual great stuff from the Onion

Side Note: For our friends in UK, Sierra Leone, or other places in Africa this is a parody from the Onion. A satirical site that makes fun of new stories in the US.