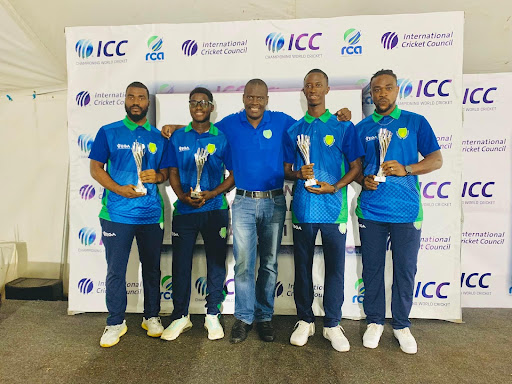 The captain of the Sierra Leone Cricket Team, George Edward Ngegba has in subsequent accession called upon President Julius Maada Bio, and sports stakeholders to seek the welfare of the national cricket team and improve their service conditions.

In December 2022, the team return from the ICC Men’s T20 Cricket World Cup Sub Regional Africa B qualifier in Rwanda, and according to Ngegba, the team has not received any payment from the government after representing the country in a 10 days contest in Rwanda.

The Patriots of Sierra Leone returned home with pride, registering four man-of-the-match awards and four consecutive victories against Ghana, Cameroon, Eswatini, and Gambia. They also ended the tournament occupying the 4th position which automatically qualifies them for the Africa Nations Cup and the Africa Premier Championship in Ghana and South Africa respectively.

Considering the good form of the team, Ngegba stated that his fellow team members are frustrated and seeking immediate responses from those in charge. On his Twitter handle, Ngegba has written a series of open notes to President Bio and the sports body, one of which he pleaded for their cries to be heard and action to be taken in this difficult moment.

“Dear President Bio, the Cricket PATRIOTS of Sierra Leone are still waiting for your call, Sir. Since we returned from Rwanda over 2 weeks ago we haven’t received anything yet from the government Sir,” said Ngegba.

Ngegba has not been the only frontline in the quest for the team’s welfare. Upon arrival at the Lungi international airport from Kigali on December 11, 2022, the National cricket team was reportedly left stranded at the Freetown International Airport after authorities asked them to pay USD 25 as a security fee.  In a social media footage, players and team officials were helplessly seen laying on the ground with frustration and tiredness after being denied entry.

However, the national cricket team is currently enjoying a smooth ride of success as the team’s world ranking improved to 59th, ranked 7th in Africa & 2nd in West Africa.