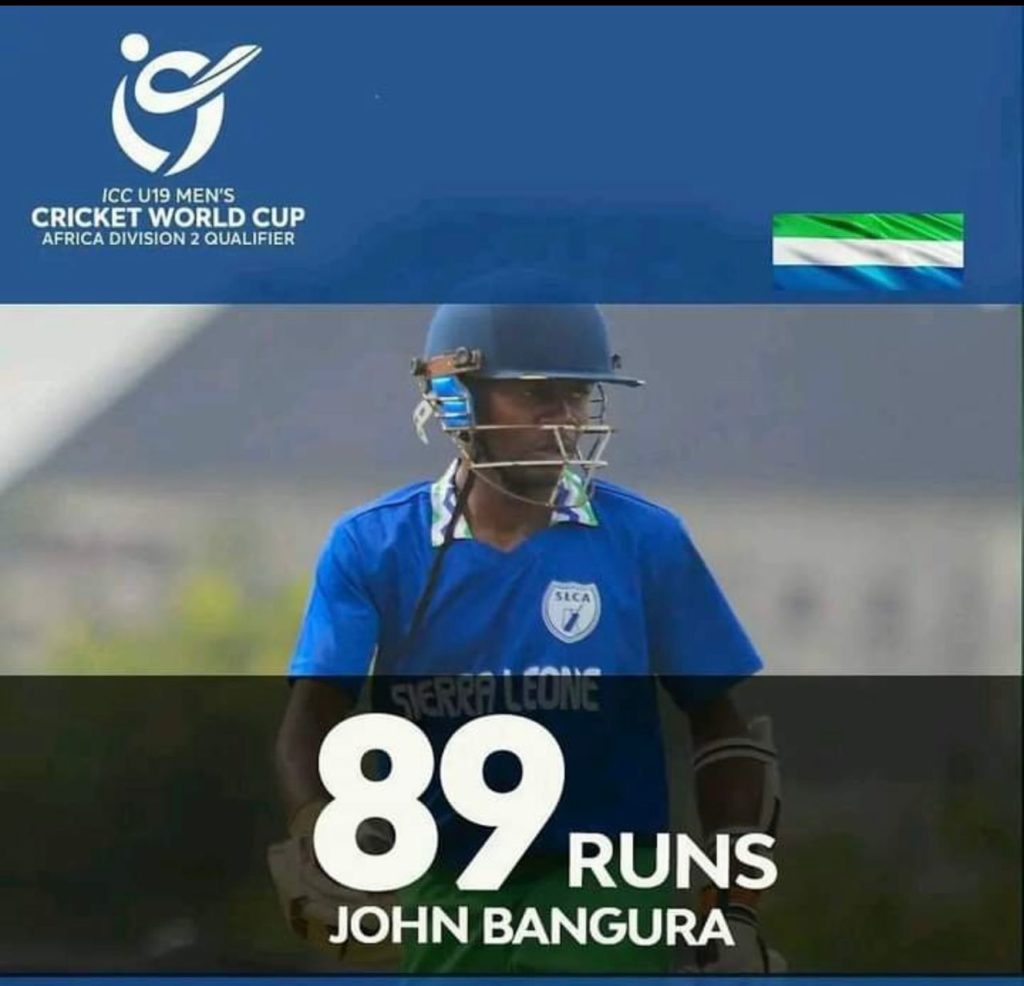 A month after his appointment as skipper of the Sierra Leone Under-19 Cricket Men’s side, John Bangura led his side to grab his first cross-border cup, taking his motherland to the ICC Men’s Under-19 World Cup Division 1 Qualifier slated for South Africa in March next year.

From a dusty oval with stone-infested outfields back home, Bangura, 18, says he understands the cricket chemistry and so was quick to decide on taking the shortest possible time to observe the conditions he met on the Abuja soil during the ICC Men’s Under-19 World Cup Africa Division 2 Qualifier.

“This helps me adapt and turn the direction of the tide. “I have endurance in batting, so it was no problem adjusting myself to the ODI way. As for our match against Kenya, the day did not simply call for me,” John Bangura, Captain, Sierra Leone Under-19 Cricket Men’s side.

With the Abuja showpiece bringing him face-to-face with the grim reality, Bangura believes he has accumulated enough experience to help forge the path to success.

“I have taken note of what happened in Nigeria. We are going to work on the few lapses, strengthening our batting system and talking the boys through the benefits of not losing catches. The affairs of the kids are over. We are going to face the bulldogs in Division 1,”

Altogether, Bangura has hit five hundred runs in ICC-sanctioned tournaments. In the three matches played in Nigeria, Skipper Bangura scored 166 runs not out, 30 against Rwanda, 47 against Botswana, and smashing 89 against Nigeria, eleven more to fix him to a century, for which he wept profusely on the alien turf.

Going back in time, Bangura started his cricket career for the Prince of Wales School in 2014, serving as Vice Captain to Edward George Ngegba up to 2016.

He started playing club cricket in 2016 and got signed by the Midwest Cricket Club at age 11. The same year, he had a call-up to the Sierra Leone Men’s U19 Cricket team for his international debut at the ICC U19 Men’s Cricket World Cup Africa Division 2 Qualifier in Benoni South Africa.

Alongside his school cricket Captain Edward George Ngegba, Bangura was exceptional at the qualifier, earning himself another invitation to the Senior Men’s Cricket team in 2017.

He was part of the Midwest Cricket team that won the 2016 and 2017 Sierra Leone T20 Cricket Premier League Titles and the Midwest Cricket Youth team that won the Sierra Leone U19 Youth Cricket Championship in 2019. Bangura was also part of the Sierra Leone U19 Men’s Cricket team in the ICC U19 Men’s Cricket World Cup Africa Division 2 qualifier in Pochestroom South Africa in 2018, finishing as runners-up to Nigeria.

In the Nigeria Bilateral Series of October 2021, Bangura was among the seniors who led the way to the recovery of the Men’s Patriots after a long absence from the international frontline. He joined the team for the ICC Men’s T20 Cricket World Cup Africa Sub Regional Qualifier in Rwanda in 2021 for a successive run.

In September this year, he was appointed Captain of the Sierra Leone U19 National Men’s Cricket team. Before his ascension to this rank, he had been the Vice-Captain since 2018.