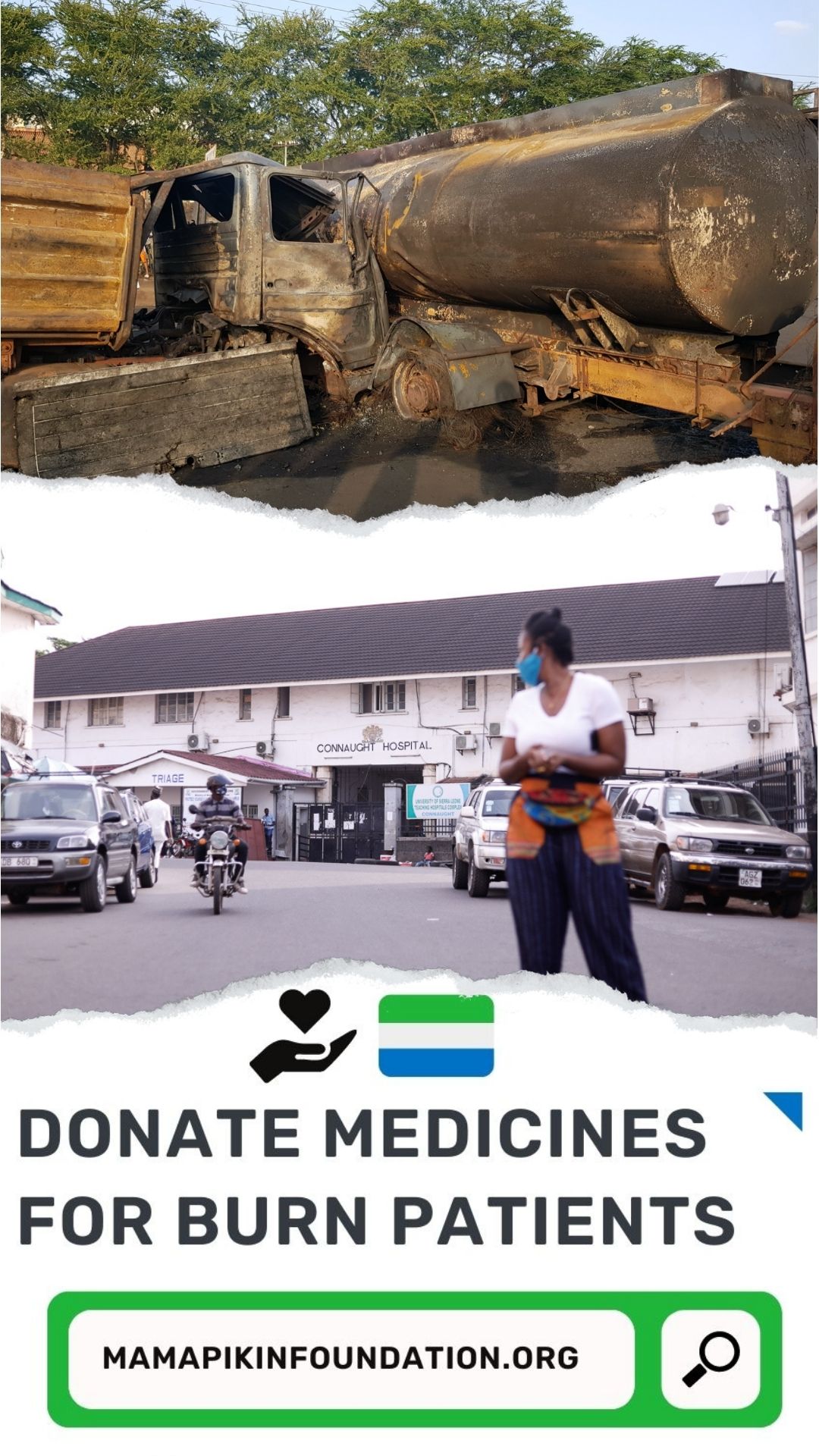 Eight of the twenty-three burn victims rescued from the fire at Wellington have died at the ICU at Connaught Hospital. This is an account from first responders at the ICU over the first 48 hours. The names of the doctors who gave this account have been withheld for their protection.

At 10 minutes to midnight on Friday, November 5, doctors attached to Connaught Hospital received a message asking them to report to work. A collision between two trucks, one carrying fuel, and the other granite, had caused an explosion with mass casualties. No one knew how many had died, but scores were reported dead on the scene by eyewitnesses.

Connaught is the largest referral hospital in Sierra Leone. It has a medical supplies unit on location managed by the National Medical Supplies Agency.

Doctors who received the notice and were available reported to Connaught as first responders. The ICU admitted patients with burns of 50% or more, and those with more minor injuries went to the other wards.

There were 23 patients admitted into the ICU. What they needed immediately for stabilization were fluids. Patients with extensive burns either die from dehydration or pain. The first responders at the ICU set up IVs to provide fluids and pain medication to patients. By the early hours of Saturday morning, all the IVs had stopped working. Patients had developed edema, a swelling of the skin that occurs after burn injuries.

One junior doctor (supported by nurses) was on duty overnight to care for 23 burn patients in the ICU. In the morning, there were two doctors.

“From 8:00 am to about noon, we did not have what we needed to treat the patients in the ICU.”

At 8:00 am All IVs needed to be changed, but there were no IV lines, gloves, and cannulas at the Connaught’s medical store. Patients died. What happens in the first 12-24 hours in the treatment of a burn patient’s treatment is the difference between life and death.

Calls went out from Connaught to all related health care officials at the Ministry of Health, and the Central Medical Stores, to alert them of the dire needs at the ICU. Each one, in turn, said they were aware and that something was being done by someone else. Call so and so and tell them. No one took responsibility to deliver the medical supplies or ensure that they were available.

Around midday on Saturday November 6, donations from private clinics and pharmacies led by Choithrams Hospital began to arrive. The gauze provided by Choithrams allowed doctors to wrap the victims and protect their skin in the absence of IV, Cotton Tree Pharmacy also donated other necessities. The donations allowed doctors, sometimes three to one patient, to insert lines with a central venous catheter (for some patients the only place they could find a vein was the neck).

Three more patients died by the time all patients were finally able to receive fluids again.

Every four hours, doctors have to remove the old dressing and wrap patients with gauze. They say they’ll run out of the donated gauze. Doctors will need IVs, syringes, cannulas, gauze, antibiotics, and more to ease the suffering of the patients. When medicines and tools are not made available to save lives, doctors experience trauma. Working in a poorly resourced medical system causes burnout, and apathy.

In recent years, the relationship between government officials, Sierra Leone Medical Association, and the Junior Doctors Association has been tense. When doctors advocate for their patients and ask for their salaries and bonuses, the government accuses them of being selfish and unpatriotic. And worse still, individual doctors are targeted, threatened, and punished for speaking about gaps in service delivery.

However, doctors on duty have little faith that they’ll get what they need to treat patients when they need it. Two private doctors have teamed up to get urgent medication delivery to the right unit and ward. Matrons on duty at the wards will send prescriptions to the Mama Pikin Foundation. The prescription will be delivered by Cotton Tree Pharmacy through a line of credit provided by the Foundation.

Dr. Fatu Forna (Mama-Pikin Foundation) has worked in various health service delivery capacities in Sierra Leone including with staff currently attached to the ICU and other wards. Dr. Fouad Sheriff (Cotton Tree Pharmacy) has been doing medical missions to SL for 15 years.

Those eager to support the supply of medicine for the treatment of burn victims at Connaught can make tax-deductible donations to Mama-Pikin.

In the coming days, doctors must prevent infections and skin tightening. Some burn victims will need plastic surgery to loosen the skin, so they don’t heal into statues. Surgeons will also need to pay for BMP (with creatinine), Complete Blood Count (CBC), albumin, and wound cultures. Connaught does have a lab but rarely have access the reagents needed to do lab tests. Doctors will need to pay for labs from private clinics.

“In this situation, patients can’t wait. When doctors prescribe medication, we need them right away.”

According to the latest news reports over 108 people have died and many more injured in the fire explosion at Wellington. Patients are being treated across several facilities including 34, Emergency, Rokupa, and Choithrams. Of the 23 patients initially admitted to Connaught 8 have died as of Monday Nov 8 at 10:00 am. Twelve patients with less severe burns including two children both about 12 years old are in other wards.