Ella Koblo Gulama Day: The Queen would have been 100 today!

Exactly a century ago a great African Woman was born in Moyamba, Kaiyamba Chiefdom, Sierra Leone. Her name was Ella Koblo Gulama.

Madam Ella Koblo Gulama was the first female member of parliament and the first woman in Sub-Saharan Africa to hold a ministerial position when former Prime Minister Milton Margai made her Cabinet Minister. 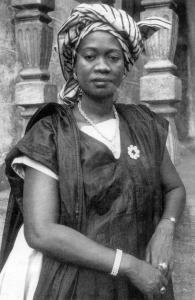 Once upon a time, there was a princess named Ella in the Kingdom of  Kaiyamba. She was deeply loved by her father, who made sure that unlike other maidens in the land, Ella would go to school and get a college education. At the age of 25, Kaiyama Kingdom held a royal wedding when  Ella married King Koblo Pathbana of the Kingdom of Marampa Masimera on  April 27, the Year of our Lord 1946.

The newly married princess left her kingdom to join her husband and (as was the custom of the day)  his many wives. Being the most educated of all of the king’s wives, it was Queen Ella who would travel with him in court.

Five years later, King Julius, Ella’s father, the King of Kaiyamba, dies. Ella returns to her home to compete against fifteen men vying for her father’s throne. The old wizards of Kaiyamba did not want Ella to be  Queen of Kaiyamba because no woman had ruled the kingdom before.

They tried everything to keep Ella away from the throne, but Princess Ella believed that a woman’s place was wherever she chose.