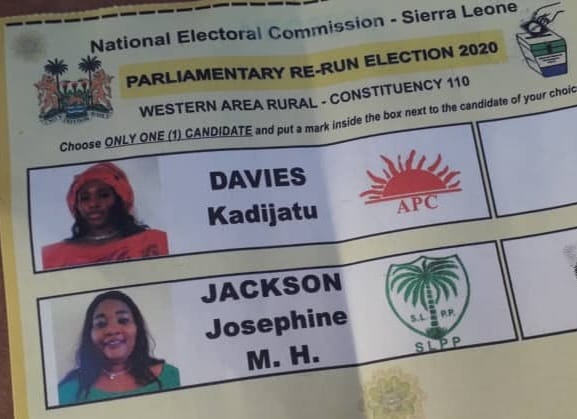 The National Electoral Commission of Sierra Leone (NEC) has in their provisional results of the parliamentary rerun elections in constituency 110, Western Area Rural, Freetown declared Kadijatu Davies of the main opposition All People Congress (APC), as the winner.

The rerun election was a tight race between Member of Parliament-elect Davies Josephine Jackson of the ruling Sierra Leone People Party (SLPP).

In August, last year a rerun election was first held in the constituency, where candidates of the three main political parties (APC, NGC & SLPP) contested. Results for that election was canceled, due to violence at some polling stations in the constituency. At the violent attack, some individuals vandalized and destroyed ballot boxes and voting materials.

So far observers have described the election as being peaceful, though there was some tension among party supporters. The election was also described as being credible.