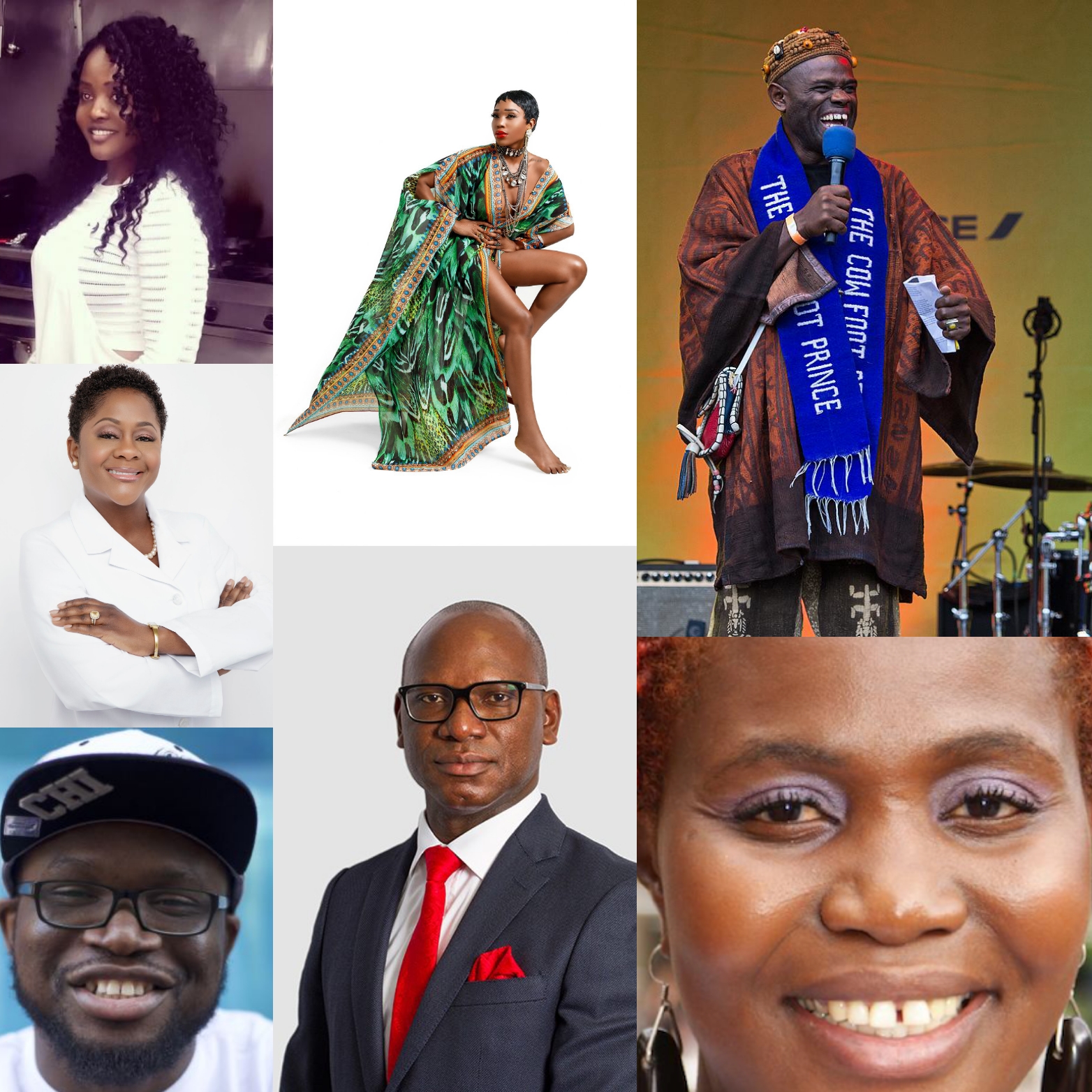 Ladies and Gentlemen allow me to introduce you to this year’s ‘You make us proud 2019’ list. This list features 4 women and 3 men who live in the diaspora but are doing extremely well in their individual endeavors to the point that they make us proud to be Sierra Leoneans.

Usifu Jalloh (Cowfoot Prince) is an experienced, talented performer and educator, he has been working in arts education for over 20 years. His production Africa’s Cowfoot and The Cowfoot Chronicles serve to promote Sierra Leonean and African cultures as a whole embodying them within our rich oral heritage. He has a passion for motivating young people to educate themselves within the context of their culture. Along with storytelling and music, he has established the Maambena Cultural Festival through the Aruna Jalloh Foundation and National Storytelling Festival in Sierra Leone to build unity and community, and connect young and old to the culture.

Sai Sankoh is a Sierra Leonean fashion designer based in Dallas. She owns a fashion brand called ‘Sai Sankoh’. After almost a decade of blogging about world-class brands, Sai launched her own signature brand Sai Sankoh in November 2018. In just 12 months, the Sai Sankoh brand has been seen on everyone from Beyonce to Yemi Alade and she is just getting started. Sai understands her audience and she is an excellent curator and visual storyteller. That and her unique sense of sense have propelled her and her brand to international success. In spite of her global status, Sai stays connected to the Sierra Leonean community both at home and in the diaspora.

Carol Mabinty Khanu chef and owner of Mabin’s Kitchen whose ancestors hail from Masimera Chiefdom in Northern Sierra Leone will go down in history as the blessed hands that put Sierra Leone Jollof on the most important or culinary map of the African diaspora, DC, MD, Va metropolis known far and wide as the DMV.  The DMV is considered by many as the Mecca of the African diaspora in the US with its eclectic mix of all West African nationalities especially. Winning Demand Africa’s Jollof Fest in the DC Metro Area on July 6, 2019, has put Carol in our forever hall of fame! Keep on cooking sis!

Dr. Fatou Forna is a physician, writer, and philanthropist. She has committed her life to service through medicine. As co-founder of the Mama Pikin Foundation Fatou has led countless medical missions to Sierra Leone bringing medical professionals to provide much-needed healthcare to communities in need. But that’s not all! Dr. Forna is also the author of the bestselling children’s book series ‘Puppy Princess Sheba’ about a dog who travels the world and has amazing adventures with her family. And that’s not all! To make it easier for young girls to transition to puberty and womanhood she developed the concept of a ”puberty party” allowing girls to explore and discuss sex, reproductive health, and puberty in an open and safe way. Fatou rocks!

Abu Yillah is a London-based Sierra Leonean filmmaker and poet. He utilizes his passion for film and poetry creating poetic films not only for individuals but also for established UK organizations. He has been commissioned by Safer London, Spread the Word, The Separated Child Foundation, Museum of London, to name a few, and in 2019, he produced two poetry films in partnership with Write2SpeakUK, funded by the Arts Council England. His most notable films to date have been pieces of poetry by two of London most sought after poets, centered on their take on London and its misunderstood youth population. Alongside his creative work, Abu co-curates the Sierra Leone Arts & Culture Festival (#SLACfest), a celebration of work from Sierra Leoneans all over the world, which aims to increase the visibility of Sierra Leoneans everywhere. Examples of Abu’s work can be found at Yillah.co.uk.

Sarian Kamara is the founder of ‘Keep the Drums, Lose the Knife’ a community interest group aimed at ending Female Genital Mutilation (FGM) in the United Kingdom, Sierra Leone and other parts of Africa. She is also an activist and an anti-FGM campaigner working both nationally and internationally with the goal of safeguarding girls and women. Sarian also helps set up the National Society for the Prevention of Cruelty to Children (NSPCC) Help Line in an effort to tackle FGM in the UK and continues to work tirelessly with numerous organizations while running workshops to support women and young people affected by FGM to access specialist services. Earlier this year she bravely used her story to counter the normalization of FGM by the First Lady at the Women Deliver Conference in Canada.

Reginald Larry-Cole is a British-Sierra Leonean business leader who has turned leasing cars into millions for himself and his investors. The author of Compassionate Capitalism which was released this year has a riches to rags and rags to riches story that offers life lessons for all. Although he is based in the UK, Reginald stays connected to Sierra Leone through the OMAC Foundation, named after his late dad Osmund Marcus Abioseh Cole. The Foundation has supported St Edwards Primary and Secondary Schools and St Francis. He also supports the arts and culture. Most notably he sponsored The Cowfoot Prince (Usifu Jalloh) festival in Sierra Leone.