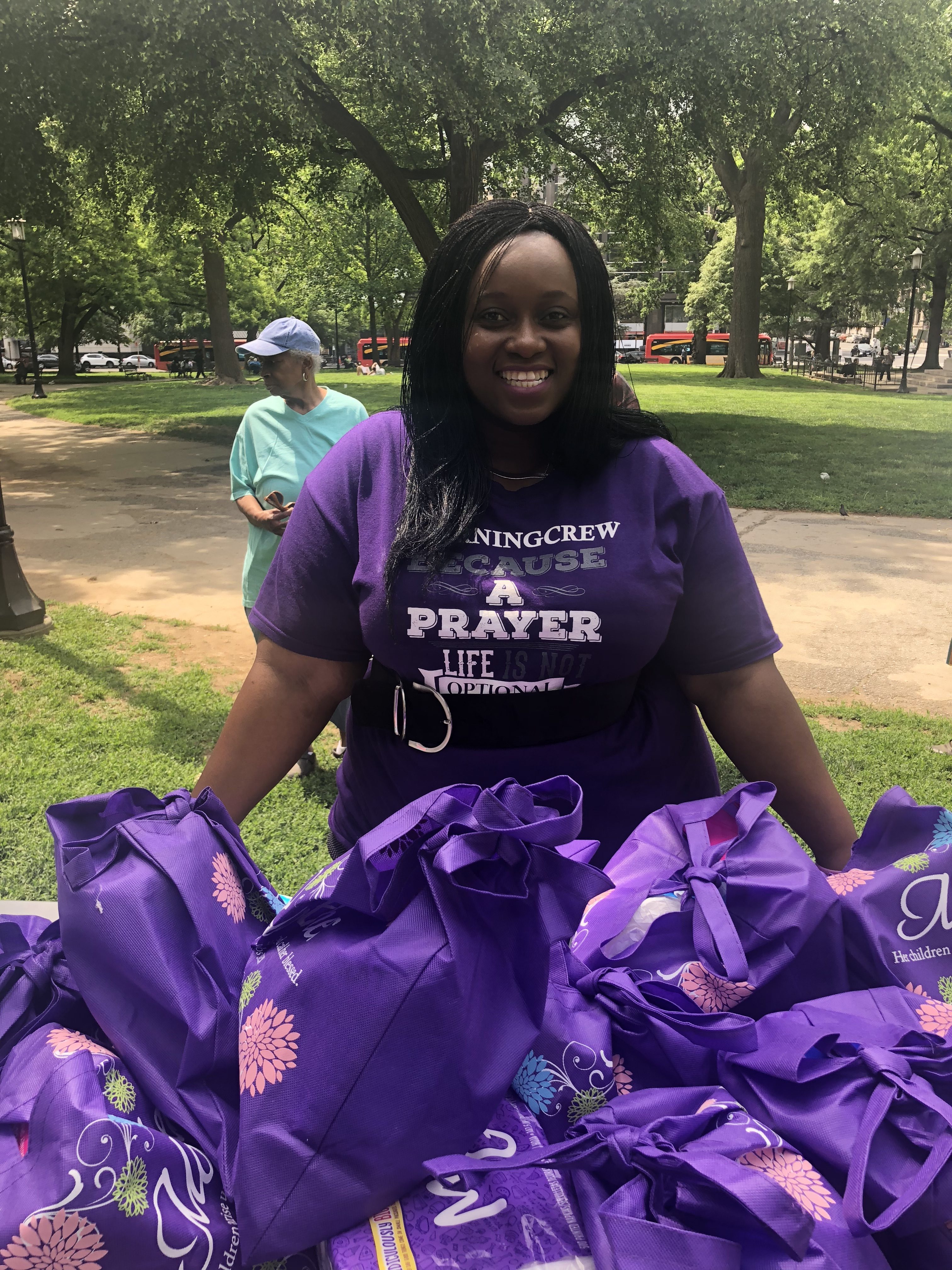 Last week Alphina Dumbuya and her “Morning Crew” a Facebook Live Group that has been meeting online for over a year fed 3000 people in 16 cities across the World. This was the Morning Crew’s first International Day of Giving.

SwitSalone caught up with Morning Crew Founder, Ms Alphina Dumbuya to talk about her Day of Giving Initiative, and how she is using faith, and fellowship to be an agent for change both on and offline.

Swit Salone: Tell us about your latest project

Alphina D.: My ongoing assignment is serving as the vision carrier of the Morning Crew. And within that entity, our latest work is the International Day to Give, in which almost 3000 people were fed in 48 hours, in a total of 16 cities around the world, on May 11 and 12, 2018.

Swit Salone: Who is your target audience?

Alphina D.: The target audience for this specific project or assignment as I call it, were homeless persons, first in my locale (Washington DC) and then around the world, as well as other persons with one types of disadvantages.

Swit Salone: Why this project and why now?

Alphina D.: Serving humanity during the second week of May each year is something I have done since May 2013, when I first founded Mummy Tea Destiny, where we honored single mother and subsequently all mothers, in honor of Mother’s Day in the United States. With the growth of the Morning Crew (the online Christian show), and because we are planning an upcoming conference, I prayerfully chose to extend Mummy Tea to a feeding of homeless mothers instead of the typical dinner. This would have been the 6th year of Mummy Tea. With the vision for the homeless feeding this May, the instruction was simple, wherever viewers were in the world, let us reach out to our communities to feed the homeless and those disadvantaged. To my amazement, total of 16 cities in 8 countries signed up.

Swit Salone: How did you discover that you had a knack for what you’re doing and what is your motivation or goal?

Alphina D.: My motivation is the love for God and for my Christian faith. I have survived many terrible things in life, including a glance at homelessness. I know what the power of prayer can do and has done for me, and for the thousands it has affected through the Morning Crew. I found my knack by not giving up on myself. I always knew it was there, and even at the times when I failed or was inconsistent in my personal goals, my down time was never long. I always got back up, often times the hardest steps to take, but I’m glad now that I was born with a never defeated mindset.

Swit Salone: What were you doing or what do you do in addition to this project?

Alphina D.: I am a mother, and an ordained minister. My full time job is in Corporate America, protecting the rights of persons with disabilities.

Swit Salone: How do you fund this undertaking?

Alphina D.: The projects for the homeless and the prior ones for single mothers have always been funded by generous donations and volunteer services from supporters of God’s vision in my hand, and also from tremendous sacrifices made by my children and me.

Swit Salone: You are becoming very well known as a person of faith in the community, what was your journey? What is your ultimate destination or purpose?

Alphina D.: I was never at this place of a spiritual life all my life, and never thought I would be, but as I searched for a better me, I encountered Jesus in Indiana, Pennsylvania in 1998. It was like a fire was lit up within me. It has caused many to run from me but it has been worth it because it has also brought many more to God. After several failures and YouTube and Facebook videos, and after publishing my first three books, and then giving up because of life issues, I woke up one morning in October 2016 and asked God what He would have me do. I was tired of just sitting around because I know I have something to contribute to my world. After much prayer, I was urged to return to my first love…media ministry. On October 13, 2016, I grabbed my phone and sat on my bedroom closet floor. I have not stopped since and the rest is what you see today. My ultimate purpose is to empower my generation to their God given purpose of first coming to the knowledge of Jesus Christ, and also to walk in faith in Him. This purpose is achieved through media evangelism and humanitarian efforts.

Swit Salone: What’s the most surprising thing that’s happened as a result of what you do?

Alphina D.: The most surprising thing to me is the desire that it appears that people, even Christians have, to genuinely and without commitment or self-detriment, have a closer relationship with God for themselves. I’ve been surprised by the love and encouragement to keep going. I truly appreciate it.

Swit Salone: What is the best? The worst?

Alphina D.: The best is the amount of lives that are daily getting closer to Jesus through the Morning Crew, and the lives that we are blessing through these feedings. The worst is the less sleep I now have.

Swit Salone: How will you know when this project is a success? What benchmarks have you set?

Alphina D.: I honestly don’t have any benchmarks for myself. What is happening is of God and I cannot gauge it in anyway. My desire and mandate to myself is to remain obedient to Him and keep my own Christian life even while feeding others through preaching and my humanitarian projects. God has a habit of giving me what appear to be these wild ideas and they work. I am so humbled and privileged because it could be anyone else. I’m still wondering how we got to the point of an International Day to Give. I simply heard it in prayer and went with it. My success is defined by my obedience to God. 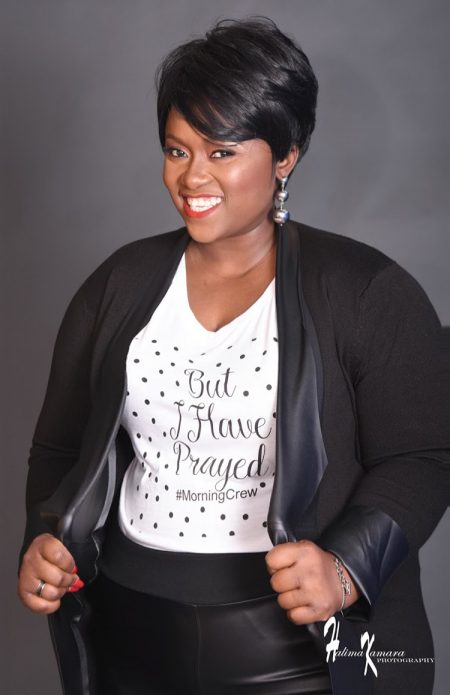 I was born in Azerbaijan. My parents are Temne and they took me to Sierra Leone at age 5. My time in Sierra Leone was spent in a former diplomatic family who traveled a lot and settled in the Western Area of Freetown in 1983. Due to the war, my family relocated to the US in the early 1990s, and I did my middle and high school, as well as undergraduate and graduate studies in the East Coast. I have the oldest girl in a family of three girls and two boys. I am the weird one. They are totally not like me lol. When I grow up I want to be God’s voice to my generation, a philanthropist, and a blessing to humanity, especially to Sierra Leone. Dreams of law school and politics are still somewhere in there too! Whatever God decides, I go with the flow. I am shy. I’m an introvert, and I speak five languages.

More on the International Day to Give

Alphina Dumbuya, known as Alphina ByFaith, is a mother of two who founded the Morning Crew, a Facebook Live prayer group in 2016 and they meet daily. This May 2018, Alphina founded the International Day to Give, in which viewers of the Morning Crew were to conduct giving outreaches in their various cities to feed, provide survival/hygiene bags, and share the love of Jesus to persons who are homeless or persons in need. In less than two months of planning and coordination, Alphina succeeded in simultaneously hosting and coordinating the International Day to Give via social media, in a total of 16 cities in 8 nations around the world. Within 48 hours almost 3000 people worldwide were fed on May 11 and 12, 2018.

The 16 cities in which the Morning Crew International Day to Give was executed on May 11 and 12, 2018 were as follows: London England, Monrovia Liberia, Lagos Nigeria, Abidjan Ivory Coast, St. John’s Antiqua, South Trinidad, Bo and Freetown, Sierra Leone, and the following states in America – Philadelphia PA, Washington DC, Sacramento City CA, Jacksonville FL, Columbus OH, Killeen TX, and Raleigh and Fayetteville in North Carolina. Viewers of the Morning Crew signed up and created teams where they lived to execute the outreaches, and Alphina used both Facebook to share with teams all that was needed, from coordinating and receiving reports of giving, to providing food suggestions, to praying together for the outreaches, and giving tips of how to interact with recipients during the outreach, there was an almost daily dialog with lead coordinators, and International Day to Give was a huge success.