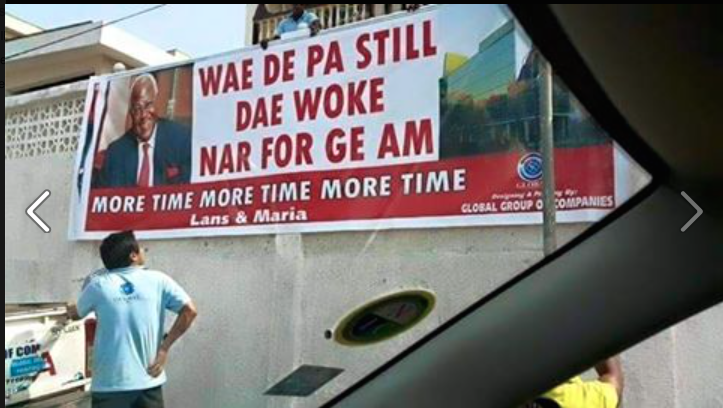 A friend came to visit and as good friends do if you’re from the middle to upper echelons of Salone society we began to ‘poligist’ ~ a new term I’ve created that means talk politics without being too political and ending all eventual banter no matter how bad with ‘Papa Ow foh do’ or my new favorite ‘Leh dem try dey’.

We were poligisting when said friend said something so profound it has taken me a whole month to finally digest it.

“If the President wants more time, he will get more time.”

The more time he was referring to was of course the extended tenure in office of the elected Numero Uno. What struck me and eventually brought me to this post was my immediate resignation and acceptance that what my friend had said was true.

Yes in the purportedly democratic republic of Sierra Leone I was convinced beyond any reasonable doubt as instantaneously  as it was said that although the current constitution limited a president’s term to two 5 year consecutive terms if re-elected, and the next elections were slated to be held no later than November 2017 (if we count back 5 years to the last elections), that if Numero Uno wanted to stay in office beyond his mandate, that that mandate would be extended to however long he wanted to stay instead.

Up until now you might have thought that there were just two things in life that were that certain; death, and taxes. Be so good as to edit your list of certainties and thank me later.

The whole situation didn’t hit me as bleak until just now when I wiped the drool off my son’s chin, and considered in that moment the general state of powerlessness of babies. Only a complete awareness of ones powerlessness would make someone say a yes he can to news that their democratically elected Numero Uno could have the law changed to keep him or her in office.

A decade ago and the years up to 2014 I was completely engaged, and invested in Sierra Leone’s leadership because I was completely certain that therein lay my hopes that we could overturn the post war status quo. These days though, I just try to mind my business and that business no longer includes questioning Sierra Leone’s leadership. If tomorrow Barack Obama publicly said that he would run a third term, he is more likely to be taken in for a psych exam than for anyone to give credence to his words.

In Sierra Leone we have a situation wherein the President has not even verbally said that he will seek a new term and yet we know it would happen if he wanted it. You know why? Because we feel powerless. There is nothing I or anyone who may be opposed to a constitutional amendment to presidential term limits can do to stop it from happening. As a people we have no power as has been demonstrated repeatedly but I shall use just one example in recent memory to show you the degree of powerlessness under which the citizenry exists.

On February 13 2015, Sierra Leone’s Auditor General released a damning report on the use of ebola funds for May to October 2014 showing in summary that we misused and abused money meant to save lives. The report was debated in parliament, there was a public hearing, it was a local, international news and social media hot topic, there were protests in the diaspora, Anti Corruption Commission rounded up some 40 people mentioned in the report for questioning but all in all not a single person was jailed or reprimanded for their part in the loss of millions of dollars that could have potentially saved lives if used properly.

Instead the public was reprimanded. The majority leader in parliament said that it was illegal to even discuss the report while parliament was debating the issue. That censure of the public and our usual inability to follow up and hold the government accountable meant that the ebola funds escapade disappeared. You would have thought that the fervor with which we spoke up would have led to something different to the usual but it didn’t. The report died where it started, and the conversations went with it.

I know in this new year if I didn’t before that we are a citizenry bereft of any kind of follow through either because others like I’m doing now long acknowledged their powerlessness or just live in apathy.

So yea, if the President wants more time, he will get more time, and every Sierra Leonean reading this knows this to be true. Tok ba if ah day lie.