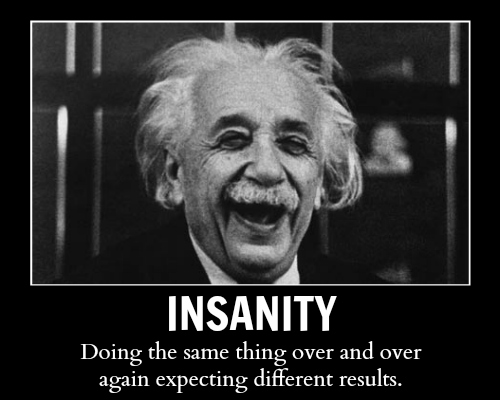 “Insanity: doing the same thing over and over again expecting a different result”

Those insane people over at Sierra Leone’s Auditor General’s Office are back at it again. They have released the latest AG’s report making recommendations and calling out malpractices in money management and highlighted yet again what government officials are doing by way of poor procurement, and unreconciled receipts for payment. Even while acknowledging that of the 953 recommendations the AG’s Office has made in the last 4 years that only 231 have been implemented they have made even more recommendations.

I call them insane because they keep doing these audits, they keep telling us what we are doing wrong, and we just keep keeping on doing the same wrong things just in time to make it into the next report. No to insanity be dat?

Anyway so that the report doesn’t fall on blind eyes in addition to the deaf government ears they already fall on, I’ve highlighted the most amusing parts below not because anyone cares but just because well you know, if the people have gone and written a report someone should read it, tis the least we could do.

The Auditor General has this to say:

“Neither the will nor the discipline to make reforms is present and even if it was it is only the first step. Reform must be balanced with staff competency and there needs to be consequences for failure for all parties.

As I have said before, with a stronger commitment and willingness to address public financial management reform and strong enforcement of existing well-established laws and regulations, combined with continuous and hard-driven capacity building, the matters could be put right quickly as other countries have done.

That is the responsibility of the government. The citizens of this country and Civil Society Organizations need to push parliamentarians, our elected representatives, to make
improvements and to levy sanctions on public officials when required. It’s not enough to have laws on the books – they need to be enforced with rigour, consistency and a strong sense of justice for all.

Parliamentarians, Ministers and public sector managers at all levels need to provide leadership by not accepting grand or even petty corruption as normative. Those in a position to do so should expose and report corruption at every opportunity and follow the money when things go wrong. As citizens, none of us should ever accept fiduciary irresponsibility from those charged with holding the strings of the public purse. To do so is morally corrosive, erodes our civic rights and damages our hard-won young democracy. Citizens have power as was demonstrated when my report on the Management of Ebola Funds was published earlier this year. The findings, widely publicized in the global media and through public hearings of PAC proceedings, engaged and enraged the people and, for the first time in Sierra Leone, a parliamentary committee brought public officials to book and levied serious sanctions.

In comparison to 2013 the rate of implementation of our recommendations appears to have marginally improved from 19% in 2013 to 24.2% in 2015. It would be pleasing to report
that the improvement was real but it is not. It has arisen simply because the Ministry of Foreign Affairs, is not included in the 2014 figures as the annual audit was not
undertaken in time for inclusion due to logistical constraints arising from the EVD crisis.

There is a clear pattern of ASSL year-over-year repeating observations recommendations across all the audit entities. The areas of repetition relate to basic tenets of public financial management and compliance with the laws of this country. Dereliction of duty, and I use that phrase conscious of its meaning, by senior public servants and others, are largely in the following areas:

There is clearly a lack of will and a systemic failure of corporate culture to address these matters. With the possible exception of procurement, where the laws and regulations are complex but addressable with training of officers, the remainder are well within the capacity even moderately skilled clerical staff if properly supervised. Indeed, not only are managers not motivated to improve but may in some cases be complicit in not doing so.

The value of the transactions associated with these areas of concern – that resources are not well managed – is on a very significant scale. In short, there continue to be problems in every area of public financial management.”

Here are 5 amusing issues I’ve pulled out from the summary:

1. Sierra Leone’s domestic revenue understated by 68.25 billion, meaning that what was captured on software as received is not what is in the till.

2.The auditor general could not assess how much external debt the government has because what creditors say they owe vs what the Public Debt Unit says it owes are not the same.

3. The Ministry of Health procured 90 of 123 ambulances needed of which proper payment policies where not followed, once they were received the ambulances were parked at Youyi Building, until they were later moved to the Cockerill Military Base.

4. Of all the drugs in storage facilities at the government stores about 20% are out of date, expired.

5. As Minister of Defense Palo Conteh, now CEO NERC entered into contracts for the procurement of 126 vehicles for the military. The Auditor General found that the contract values were over priced (meaning that the Govt paid way more than market value) by $6.1 million. There are still 77 of these vehicles that have not been delivered. Vehicles were supplied that did not meet the specifications, taxes were not paid by the supplier, and repair parts that where meant to be supplied were not supplied. <—-“Some findings stand out as especially egregious and need to be highlighted. In November 2013, the former Minister of Defence acting on behalf of the Government entered into agreements for the procurement and supply of 126 common use and specialised vehicles in two lots of 69 and 57 with two suppliers involving the sums of US$10,654,168 and US$5,058,368 respectively. A number of issues were identified with this procurement”

For more pleasantries from the 2014 Auditor General’s Report click here for your amusement.