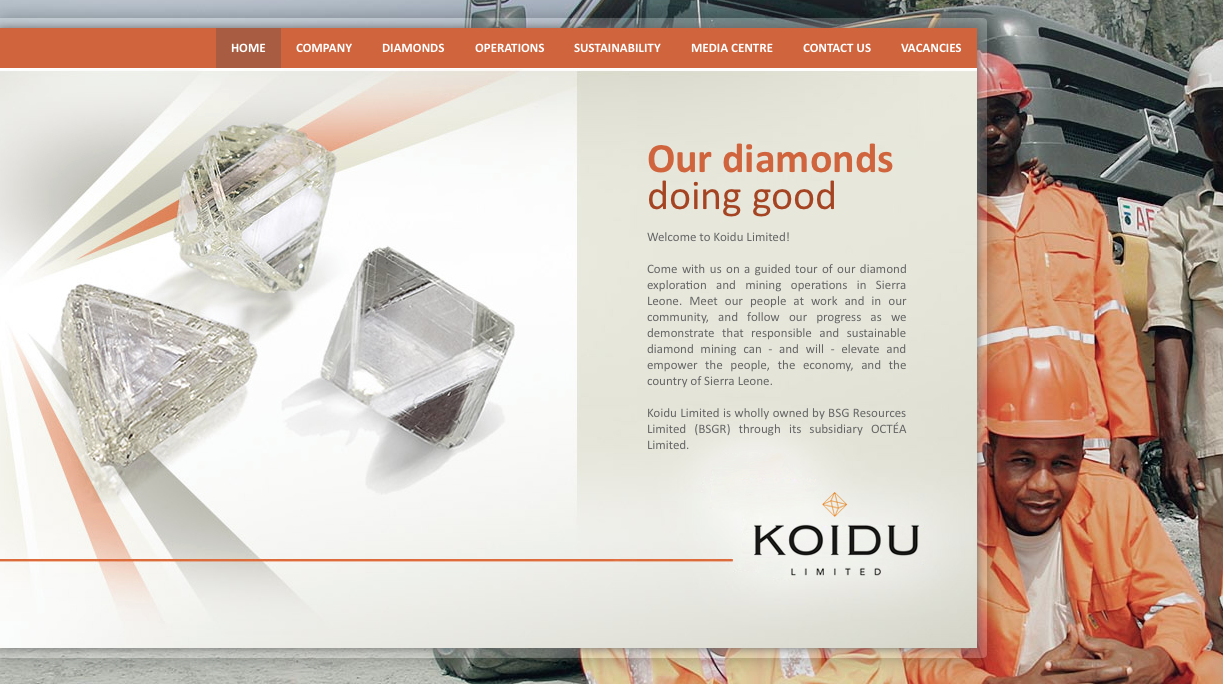 A ten-strong team led by Mines Minister Minkailu Mansaray is in London for crisis talks set for 16 November, on the future of the Koidu diamond mine, which is currently owned by Octéa Limited, a debt-laden subsidiary of the Israeli billionaire Beny Steinmetz’s BSG Resources (BSGR). Mansaray’s team is meeting Octéa’s bankers, Standard Chartered Bank, to see if the mining company has the financial legs and commitment to continue. If the government believes these are lacking it may revoke Octéa’s mining licences.

BSGR has tried to sell Octéa but buyers are wary of its debt. The country is already in severe economic distress in the wake of the Ebola epidemic and the collapse in iron ore prices, which has caused two mines to close with the loss of thousands of jobs.

‘We want the [diamond] mines to be fully operational,’ Mansaray told Africa Confidential in London. ‘We are here in an effort that the mines operate within the mine plans that have been submitted.’ Recent letters from Mansaray, who said he did not want to prejudice negotiations ahead of the meeting, indicate he does not think that the mine has a future with Octéa at the helm.

‘The Government of Sierra Leone is of the view that Octéa Limited is in fact or effectively insolvent, unable to meet its financial and operational obligations and without a long-term plan for the development of its mines at Koidu, Tonguma, and Boroma,’ Mansaray wrote to Octéa creditors Standard Chartered and the jewellers Tiffany & Co., a major customer of the mine, in a letter seen by AC dated 28 August which was headlined ‘imminent cancellation’ of Octéa’s Koidu mining licence.

It is a sharp reversal of fortunes for a mining company that Steinmetz had intended to put on the Hong Kong stock market in late 2012 for an estimated US$2.5 billion.

The fate of BSGR in Sierra Leone hinges on two factors: whether the creditors call in outstanding loans on which Octéa has already defaulted and whether Sierra Leone follows through on its threats to cancel the licences. BSGR’s London lawyers Mishcon de Reya have repeatedly remonstrated with the government to try and stop the licences being cancelled. Their letters, seen by AC, speak of BSGR being ‘shocked and dismayed’ by the Freetown government’s position. Mishcon also offers some warnings of its own: ‘…we insist that your Government refrains from contacting Standard Chartered and Tiffany & Co directly,’ it said in a letter dated 31 August.

In another letter seen by AC, dated 5 August, 2015, Standard Chartered told Octéa it was in default on a $92 million loan from January 2011. The company had ‘failed to comply’ with its obligations, the Bank wrote, by missing five consecutive monthly repayment instalments, as well as missing a 25 March deadline for payment of the deferred principal amount. BSGR is guarantor of the loan.

The London meetings also follow several direct warnings from Mansaray, sent over the course of ten months, that Octéa has repeatedly broken the terms of its licences. ‘The Government of Sierra Leone are concerned about Octéa’s solvency,’ Mansaray wrote to Octéa Mining in a letter of 11 August which AC has also seen. ‘It appears as if the company’s liabilities exceed its assets and without the infusion of substantial capital, Octéa is likely to cease operating as a going concern,’ the minister wrote.

Mansaray noted in a separate letter, also seen by AC, that the company was no longer paying the government statutory social security payments on behalf of its staff, and said that if the company could not prove its solvency and supply a list of debts and creditors, the government ‘will take necessary action within our legal rights… to cancel or not renew the existing [mining licence agreements]… and/or to secure Octéa’s assets in lieu of the company’s outstanding obligations.’

Today, an estimated $80 mn. of the Standard Chartered debt remains outstanding, alongside $44 mn. owed to Tiffany, from a $50 mn. loan made in 2011, plus more than $12 mn. owed to the government and $15 mn. to local trade creditors. Government officials fear for the future of the mine and the potential impact of the debts on local creditors.

The company’s own records show an indicated 6.4 mn. carats total resource across the three mining sites for which it has licences, with production estimated to continue until at least 2030. The company had said it planned to expand its main site at Koidu, where its licence runs until 2030, as well as dig underground at a new site at nearby Tonguma, where it has a licence until 2036.

But the ambitious expansion plan was dependent on capital investment of close to $90 mn. that never materialised. Industry insiders blame mismanagement and a deliberate attempt to strip out company cash and assets. ‘Given BSGR’s transaction objectives, it has taken a decision not to invest additional capital in Octéa at this time,’ said Standard Chartered in the August 2014 note about the proposed sale.

A BSGR spokesman dismissed claims the company was attempting the strip the mine’s assets: ‘We have put together a technical plan for the development of the mine [Koidu] for another five to seven years and that’s what we will be discussing with the Sierra Leonean government’.

Within two years of contemplating the $2.5 bn. listing, which never materialised, an August 2014 note from Standard Chartered instead gave the company a ‘best-case scenario’ sale price of $330-400 mn. Today the valuation looks even lower. Operations at the main Koidu site, which produced nearly 350,000 carats in 2013, are in dire straits, while production slated to begin at Tonguma in 2017 remains a far-off dream.

Perhaps prompted by problems in Guinea, BSGR has spent the past two years trying – and failing – to sell its 100% stake in Octéa, which owns the Koidu, Boroma and Tonguma licences. The failed sale, alongside the collapse in Octéa’s fortunes, may have been caused by BSGR’s woes in neighbouring Guinea, where Steinmetz and the company are the subject of corruption probes that began in 2014 in the United States and Switzerland (AC Vol 56 No 17, Swiss probe in Conakry).

‘Some investors may find an association with BSGR problematic given the current exposure to ongoing issues for BSGR in Guinea,’ said the August 2014 Standard Chartered note. ‘BSGR is now looking to make a clean exit from Octéa as its primary objective. This should limit any potential exposure or risk to the inbound investor from the ongoing issue for BSGR in Guinea.’

Some potential interested buyers, including US group Keffi as well as Indian companies have also been put off by the debt, as well as the heavy capital requirements of more than $100 mn. While BSGR is the guarantor of Octéa’s debt with Standard Chartered, it seems that BSGR wants any buyer to take on that debt as well. A compromise deal might be possible if Standard Chartered were willing to write down some of the loan.

But Brett Richards, who recently resigned as Chief Executive of Octéa, has suggested that the company could ‘cut and run’ within a year. While he was still Chief Executive, Richards told Mansaray in August that he wanted to ‘take off his BSGR hat’ and he had grave doubts about BSGR’s long-term intentions for the mine. The meeting between the two men was secretly recorded and AC has listened to the encounter.

Richards – who resigned after BSGR executives (and others including creditor Standard Chartered) were sent copies of the recording – said that in the absence of any investment, the entire mining operation ‘stops next July’. It would be a devastating blow to the already decimated Sierra Leone economy.

Richards later sent an email to company officials in which he defended his actions as deliberate ‘theatrics’ as part of a ploy to save the mine, saying of government officials: ‘…we are not dealing with intelligent orthodox people… we are dealing with corrupt megalomaniacs’. If anything, relations between the government and BSGR have worsened further since then: and there is likely to be some hard bargaining this week.