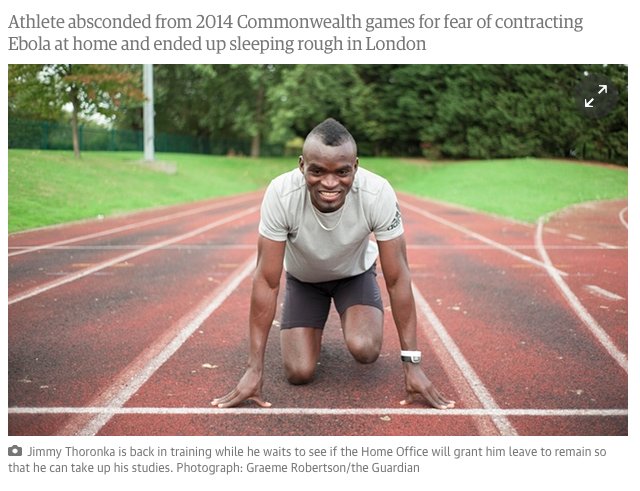 The UK Home Office has given Jimmy Thoronka up to Monday October 5th to declare his intention to return to Sierra Leone voluntarily. Thoronka who stayed back in the UK after last year’s Commonwealth Games had recently filed for asylum there on the grounds that he had lost much of his family to the ebola crisis and had a scholarship to further his education and sprinting career.

If Thoronka does not return to Sierra Leone now that his request for asylum has been rejected he could be arrested and deported. His lawyers had claimed in their asylum appeal that Thoronka was traumatized but the UK immigration body says that the athlete can seek counseling back in Sierra Leone.

It would have been quite a shock if the Home Office would have allowed Thoronka to stay because it clearly would have sent the message to others that this sort of behavior is acceptable that they too could meet a similar fate. Although this certainly will not deter asylum seekers already in the UK and others hoping to use the entry given to them for special events like the Commonwealth Games to stay in the UK