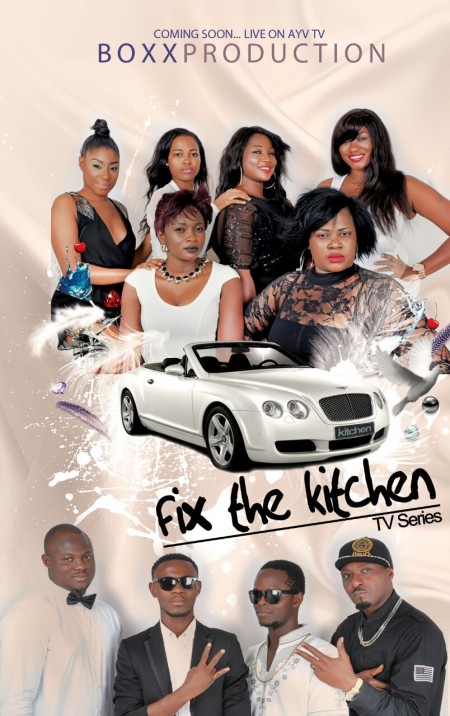 “Fix The Kitchen” is an all-Sierra Leonean cast television series that depicts societal struggles in identifying honour and also prestige . It encompasses all works of life. It’s a society where prominence is abstractly visible. For those at the top level, they know the least they can do is to stay at the top. The ones at the bottom, are also doing more than their best to make a place at the top. It’s a clash of interest when conflict started emerges, suddenly, the centre can no longer hold. And then things started falling apart, individualism and selfishness started coming into play. Contained in this series are nine major characters; Wottay, Miatta, Dani, Ella, Leona, Miss ‘H’, Tumbu, R.J and King Dos.

Everything started well with all of them, and Wottay Brown (Zulaiya Momoh) has just won her three straight best actress awards for the year. She led a simple life and accepts everyone for whatever they do and she was hardly seen with any guy around except when King Dos, the musician came around with his web of words to flirt around like he did with most of the girls; unfortunately, they break up before they could even get started.
Miatta kpaker (Mary Jane Lansana) who is staying with her closet friend Wottay, would be best described as The Empress  of ‘Fake All Stars’. She is so immune with lies that she easily gets everyone annoyed whenever she talks. Unfortunately for her, she does not even aware of what is going on around her world, she feels so comfortable with herself and ever ready to talk. Please don’t mention anything whenever she is around!
Dani (Ken Kargbo), the biggest music producer in town who survived ebola years back is desperately searching for her kid sister Ella. Dani is a cool guy and apart from his career, nothing else interests him. He would hardly hit down the bar even for a beer. He feels so occupied with the studio work, but eventually that changed when Wottay Brown stopped at his studio one evening to record a voice over for her upcoming movie and the two started getting along.
Leona Thomas (Ellen Keister) is a popular Tv presenter who takes sex for granted. In all her career, she has been around superstars, she knows their ins and out, and how they flirt around girls and dump them after. Therefore she set herself an experiment, that she would refrain from having sex deliberately in her new relationship with Tumbu (The footballer). In the end, the experiment didn’t workout, she loses when Tumbu gets fed up with everything and started seeing R.J (The P.A).
Ella (Sonia Adams) in the play who has just returned from Ghana, is an aspiring singer who wants to make it at the top like any other top artist in the country, so she doesn’t care to go all out to reach that level. Ella, apart from her aspiring ambition, she is also searching for her brother Dani who mysteriously disappeared from the quarantined home where the entire family died of the ebola disease. The two siblings are roaming the town but their path has never crossed before.
Miss ‘H’ (Hannah Daramy), is the manger who manages the biggest Rap artist in the country King Dos. Miss ‘H’never had enough so she always demanded more from her artist. But apart from that, she has a secret eye for the rapper!
Tumbu ( Sullay ‘Spiderman Kamara) is an upcoming footballer who is madly in love with the Tv presenter Leona… But after a twist and turn, he grows frustrated by the act of not having a physical relationship with Leona so he made a switch with the P.A, but even that was short lived when he discovered that R.J has snitched with his best friend King Dos.
R.J, the P.A (Hurai Bangura), is a P.A to the manger Miss ‘H’…  R.J can easily seduce men within a twinkle of an eye, and any man she likes, crosses her path, would stand still, coz in actual sense, she is marketable.
However, when the tide gets higher, there are other characters who make the switch like D.J  Boxx (Alie Keita) who keeps spying on the little ups and downs going on in the whole play…

And finally, King Dos, (Douglas Davis), was the architect and engineer, to get the Kitchen all messed up by sleeping with a host of many beautiful ladies including Ella who is only too young and desperate to come out. Now Dani is King Dos’s producer and engineer in his songs, and when Dani gets to know that it was his darling-angel-sister whom he was desperate to contact, has fallen under the spell of King Dos, would that be the end of King Dos’s career?

Now the kitchen is scattered, who will…FIX THE KITCHEN?

Kao Denero nominated as ‘African Rapper of the...

A look at KME 2 months before Ecofest

Naija candy for your eye: D’Prince the human...