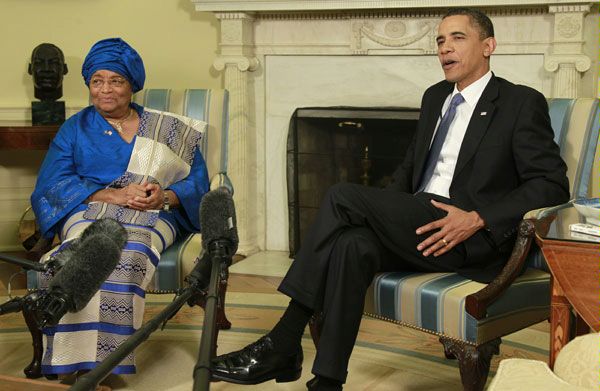 Speaking to members of the United States Senate Foreign Relations Subcommittee on African Affairs, Liberia’s President, Ellen Johnson Sirleaf says Obama is to be credited for her country’s success in curbing the spread of ebola.

“We have seen a drop from around 100 new cases per day at the peak of the epidemic, to only 10 confirmed new cases per day over the past week.  Our six active laboratories have tested 60 samples a day, but on average only find 8 new Ebola cases per day. The 4,000 contact tracers which involve community workers are following some 7,000 persons.  Doctors, nurses and other health care workers, some 174 of the over 3,000 who have died, are no longer at risk because quality treatment facilities are available to them.  We are happy to say that 1,312 persons including 345 children, many of them orphaned, have walked away free from the disease,” Read More Here: ThisIsAfrica

On September 9 President Ellen Johnson Sirleaf wrote a letter to President Obama asking for immediate help and intervention with containing the spread of ebola in Liberia. She said that without direct help from the US Liberia would lose the war on ebola. Within a week of President Sirleaf’s letter, Obama announced that the US would commit $500 million and send 3000 troops to assist with building treatment centers, and training. The first set of troops that arrived in Liberia were with the 101st Airborne Division. They were followed by 700 more troops in October.

On December 1st  WHO announced that Liberia and Guinea had met their WHO targets for tracing, treatment and burials for 60 days. Out of the three nations worst hit by ebola it was Sierra Leone that had fallen short on its 70% treatment goal.

Although Liberia has the the highest number of ebola deaths to date, it no longer has the most cases. As of December 10th Sierra Leone has surpassed Liberia in cases.