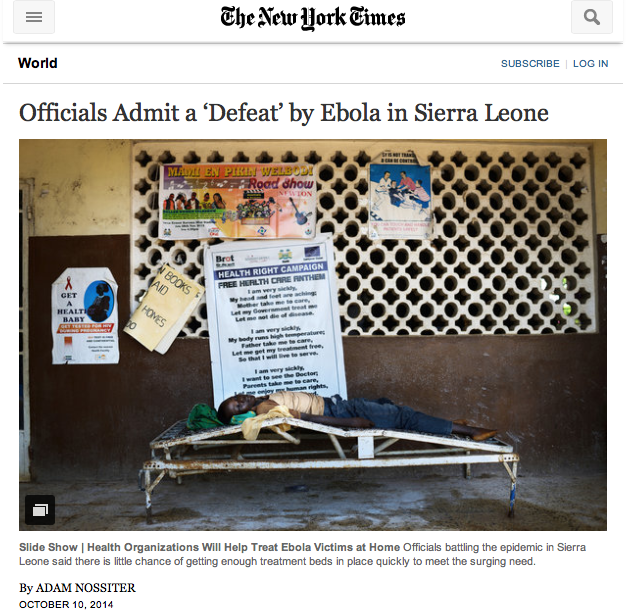 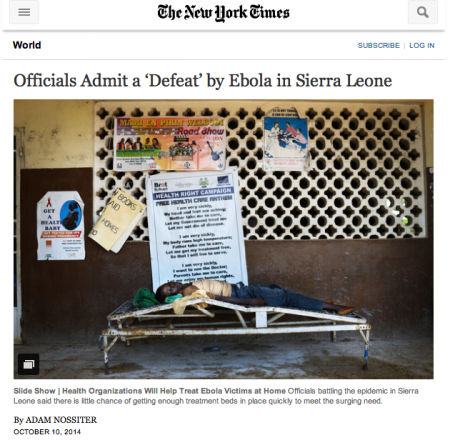 According to a report from the New York Times, some families in Sierra Leone with no place to go for adequate ebola care will now be allowed to keep their sick at home. Foreign health experts there say that the government and international community will not be able to mobilize enough hospital beds, and train doctors to meet the nation’s immediate need.

WHO latest assessment of the number of beds needed is about 1200, however only 1 out of 4 people with ebola currently has a bed. The NYT report quotes a US Center for Disease Control official there, Dr. Peter H. Kilmarx who says thats that allowing people to be cared for at home is “admitting failure”.

The government of Sierra Leone official quoted in this article, Steven Gaojia who heads the Ebola Emergency Operations Centre effort denies that the policy has been adopted. Mr Gaojia is quoted as saying, “We are not so desperate as to go to that level right now”.  Other than the patients interviewed for the NYT report, Steven Gaojia is the only Sierra Leonean voice in this report. The Ministry of Health should comment on this as it is a complete turnaround from the previous policy that encouraged people to seek care at the ebola treatment centers.

How can one self quarantine from family members in ones home and provide care for them at the same time? In a place like Sierra Leone where most people usually seek drip ands injections for all ailments the image of desperate family members, needles, and ebola in one household is just scary.