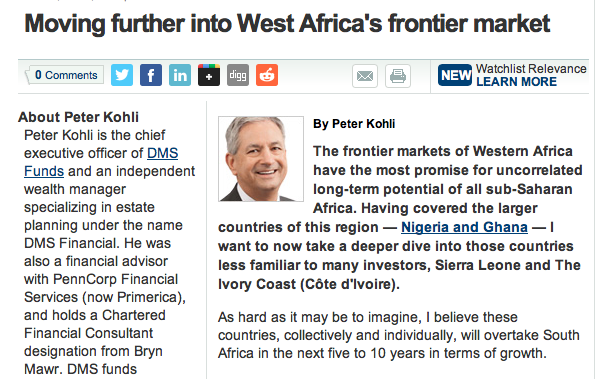 In Market Watch Peter Kohli has predicted that “frontier markets” in West Africa like Sierra Leone, Ivory Coast etc. will surpass South Africa in growth in the next 5 – 10 years. Kohli is a lot less skeptical about foreign investment in Sierra Leone than many of us. Here is what he wrote: 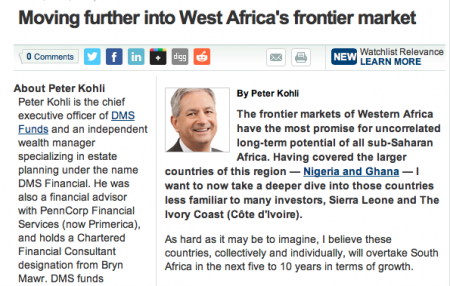 Sierra Leone
Sierra Leone, a country of six million, experienced GDP growth of roughly 15% in 2012 and again in 2013. Like many African countries, this growth was driven by the mining sector. Iron-ore production contributed to the country’s GDP growth from 6% in 2011 to current levels, which are expected to continue as iron-ore projects become fully operational.

African Minerals AMLZF +1.26%  owns 80% of the Tonkolili project, having sold 16.5% share of it to China’s Tianjin Minerals and Equipment Group (private). Previously, AMI received a large investment from China’s Shandong Iron & Steel Group . With these investments, the company will expand Tonkolili from 20 million metric tons per year to 35 million of open-pit production. For comparison, the Carajas Mine in Brazil, the world’s largest iron-ore mine, produces over 300 million metric tons of ore.

China is a huge investor in Sierra Leone. According to the country’s Ministry of Mines and Mineral Resources, China’s Kingho Energy Group Co., Ltd (private) will spend more than $6 billion in the development of mineral resources there. These projects include the construction of a railway and a deep-water port.

China isn’t the only investor in Sierra Leone. London Mining UK:LOND -0.46% owns 100% of Sierra Leone’s Marampa mine, a working iron-ore facility (mine, power plant and processing plant) with an estimated 40-year lifespan, according to the company. Currently it is producing 5.4 million metric tons per year.

Iron ore is not the only natural resource Sierra Leone boasts. Its largest diamond mine, Koidu, supplies U.S.-based Tiffany & Company TIF -0.49%  with many of its diamonds. Koidu is privately owned by Hong Kong-based, Israeli-owned Octea Mining. London-based Stellar Diamonds PLC UK:STEL 0.00%  holds the Kono and Tongo diamond properties in Sierra Leone as well as various licenses in Guinea.

Despite the huge investments in mining, Sierra Leone has a significant agricultural economy, including cocoa from its arable farmland and fishing from its 250 miles of coastline. There is little processing, however, of any produce which is attributed to destruction during the country’s 1991-2002 year civil war and the ensuing years of civil unrest.

With the help of Britain, the former colonial power, and a large UN peacekeeping mission, the country has been recovering. Democracy consolidated at the 2012 elections, the first held without UN supervision.

As with any post-conflict country, the short-term can be rocky. However, long-term, the prospects are bright. According to the Doing Business Report 2014, a joint report by the World Bank and the International Finance Committee, Sierra Leone was among the world’s 20 best countries to do business.

According to the report, as a whole Sub-Saharan Africa continues to record large numbers of reforms aimed at easing regulatory burdens on entrepreneurs.