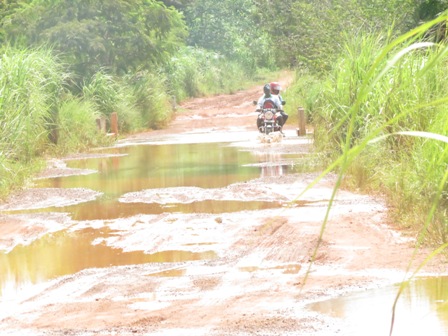 The roads and farms of 8 villages in Marampa and Maforki Chiefdoms have been flooded. Community members say the flooding is being caused by London Mining as it searches for hematite deposits in Port Loko District, but the company that heavy rains are to blame.

London Mining began operations in 2010, taking over and expanding on  mine previously operated by Delco. As the company continues to grow so too have the expectations of the residents in the communities affected by the project. Many were led to believe that the resurrection of the mine would make their lives better. There were also high hopes for jobs.  Today there are complaints that the $100,000 road built by the company for the benefit of the communities is unmotorable in addition farmers say the company has blocked the water way and caused major floods.

According to Mohamed Dollar Kamara Chairman of the land owners association representing the villages, the current floods have affected up to eight villages in the concession areas of London Mining and that the company has deliberately refused to take full responsibility.

“The flooding which is in its worst state this year has destroyed crops, affected transportation and education as some roads in some of the villages have become almost inaccessible”, he said.

Pa Brima Sankoh section chief of Gbom Limba one of the affected villages, an elderly man of about 80 who lived through the Delco era says things were better back then when the now defunct mining company operated in the same mine.

“London Mining has no respect for us, they destroyed our roads, our sacred bush and now it is our plantation”, he said with dismay.

Pa Sankoh wants the government to get involved, or he fears things will get as worse as they did in the diamond town of Kono.

London Mining has constructed  two additional iron ore processing plants on the water way, and this has blocked the creek which empties into the Rokel River. With the smaller creeks not reaching the river the farms and roads have flooded.

Osman Lahai, Communications Officer of London Mining whilst denying knowledge of any reported case of flooding in their concession areas reiterated the company’s position that they are not in any way responsible for the floods that have destroyed the plantation of farmers in villages like Tendata, Katik, Gbom Limba and others.

“Generally it has been raining heavily across the country and that might be the reason for the reported flood but as far as we are concern we have not caused any flooding and we will not take any responsibility of that”,  he explained.

However, the company’s Environmental Impact Assessment which is to be a public document is still kept in secrecy. It cannot be accessed either on the website of London Mining nor that of the Environmental Protection Agency or even the Mines and Mineral Resources Ministry.

Meanwhile, there is growing tension amongst young people in the township of Lunsar as most of them from different part of the country are still waiting with high expectation of having a job after they have allegedly bribed some senior workers of the Company.

Frank Conteh, youth leader of the Port Loko District Council said the issue of unemployment is serious in the township of Lunsar alleging that the employment strategy of London Mining is making it more difficult as they normally conducts exams for over five hundred people for like just fifteen spaces.

“The government is not helping out, London Mining is operating with impunity because they are covered by some senior members of the government who are benefiting directly, they are raising our hopes and they are not giving us the jobs even though we are indigenous.”

Conteh said if immediate action is not taken to address some of their concerns they will be left with no option but to go on strike to force the authorities attention.

Despite the current surge of mining companies in the country the sector still faces many challenges, including weak laws and concessions that is seeing it loosing large revenue that could have been earned from taxes and licensing agreements and these are needed revenues that could be reinvested for example in the healthcare sector to help those people whose health is affected by mining operations.

In 2009 the Ministry of Mineral Resources enacted the Mines and Minerals Act 2009. The Act was criticised by local civil society organizations like the  Campaign for Just Mining who argued that the Act gave more power to foreign multi nationals than to the people.

“Tax evasions to multi-national companies is eminent in the Act and this has caused more loss to our country while the few that are connected and the mining companies benefit,” says Leslie Mboka of the Campaign for Just Mining.

Sierra Leone’s candidacy at the global Extraction Industries Transparency Initiative (EITI) was suspended earlier this year when a $6 million went unaccounted. The  current floods in Port Loko are just one more indication that Sierra Leone still struggles to manage its mining industry.

Sierra Leone: The most amusing parts of the...

In The Mist of Power: President Kabbah’s Farewell...

Sierra Leone: The few, The proud, The brilliant