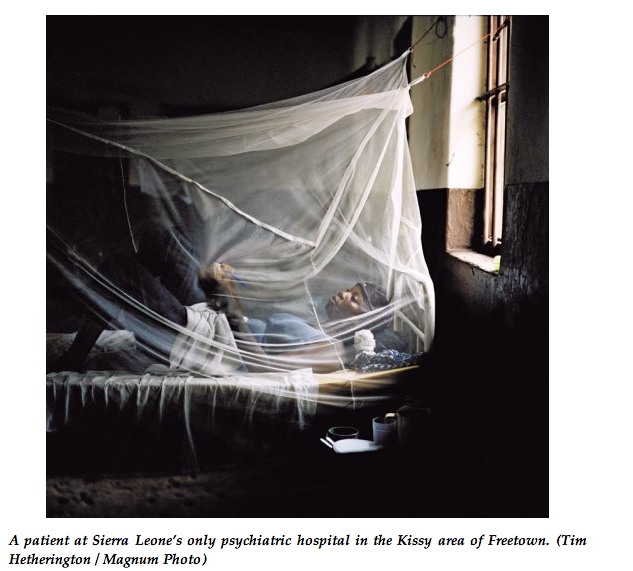 Dr. Edward Nahim is Sierra Leone’s only psychiatrist. In a recent profile in Newsweek we get a glimpse into the country’s only Mental Hospital, some of its patients, and the man who runs it. Built in 1872 Freetown’s Mental Hospital in Kissy known locally in Krio as ‘Crase Yard’ was the first institution of its kind on the continent. Today the building is a relic much like Dr Nahim who is retired but with no one to take his place has to continue working.

The government is supposed to be launching a new Mental health Plan which should increase the number of psychiatrists to 5. In neighboring Liberia the situation is equally as grim with one psychiatrist and one mental hospital. Both countries have populations traumatized by violent wars that lasted over a decade and mental health has been a very small. See except from the story below and follow the link for the article which I highly recommend.

The 67-year-old psychiatrist tilts his head up and says he will bring out the most “lucid” patients for me to interview. An aid escorts them in separately: a young Nigerian man with a wide smile who believes his penis has split in two; a middle-aged man with deformed elbows who speaks fluent German and is “a prophet of God”; a petite elderly lady with missing teeth who says she is pregnant with twins; and a man who divides his life into historical epochs and claims he is visited each night by people who torture him under the orders of his ex-lover Claudia Schiffer.

Nahim chuckles as he finishes his paperwork. “You won’t find patients like this anywhere in the world,” he says with a strange air of pride.

Nahim is the only trained psychiatrist in Sierra Leone, a nation that suffered one of the most brutal civil wars in Africa. Earlier this year, former Liberian president Charles Taylor was sentenced in The Hague to 50 years in prison for “aiding and abetting” war crimes during the 11-year conflict, which killed 50,000 people and left countless others maimed and with deep psychological wounds. After the war ended in 2002, a mental-health survey conducted by the World Health Organization (WHO) estimated that 400,000 Sierra Leoneans suffered from mental illnesses such as depression or post-traumatic stress disorder, with less than 1 percent of the population receiving treatment.