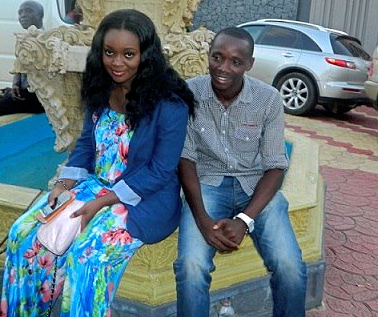 Since we broke the story on the government of Sierra Leone’s support of Desmond Elliot movie productions Elliot has since said that his ancestors though based in Nigeria had originally come from Salone. For his new movie Elliot has tapped Ghana’s Jackie Appiah. If you remember, she was interviewed in Accra on the Vickie Remoe Show in 2010. Appiah flew to Freetown to star in another Elliot movie after production for Reflections wrapped. From Freetown Swit Salone Report Alpha Bedoh Kamara filed this report:

Appiah who is expected to be in Sierra Leone for two weeks, arrived in Freetown over the weekend onboard Kenya Airways for the shooting of the film by Africa Young Voices (AYV). The managing editor of AYV Newspaper, Ahmed Sahid Nasralla, aka De Monk, says the director of the film, Desmond Elliot, is impressed with the Sierra Leonean cast and that he admires their enthusiasm and their ability to learn fast.

“It shows that young Sierra Leoneans have been waiting for this opportunity and I am moved by the way they are grabbing it,” Elliot said.

According to De Monk, Appiah will be playing the role of the wife of an independent candidate in the film.

“The film has already been described as a Pan-African film movie,” De Monk said, adding that it brings together the best of Nigeria,
Ghanaian and Sierra Leonean actors and actresses. Sierra Leonean musical sensation, Emmerson Bockarie, is also said to star in the film as Felix, body-guard of one of the presidential aspirants in the movie.

De Monk also said that more than 300 Sierra Leonean actors and actresses are involved in the shooting and that the film is almost 70
percent complete. Elliot said AYV Group is a Pan-African company and that it does not only ant to see standardization of the country’s emerging movie industry but want to give meaning to the lives of the country’s youth.

The Head of Marketing and project co-ordinator, Rachael Sesay, said she was happy for the arrival of Appiah. She said Appiah, Elliot and the Sierra Leonean cast are a fantastic combination that would give the film an international appeal.

“She said AYV caters for young people who over the years have were marginalized and made to perpetrate violence in society. We want to exploit the talent of young people in Sierra Leone to make them responsible citizens. Elliot and Appiah will combine their talents to shoot the movie with ethical dictions, constructive grammar and quality film production,” Sesay said.