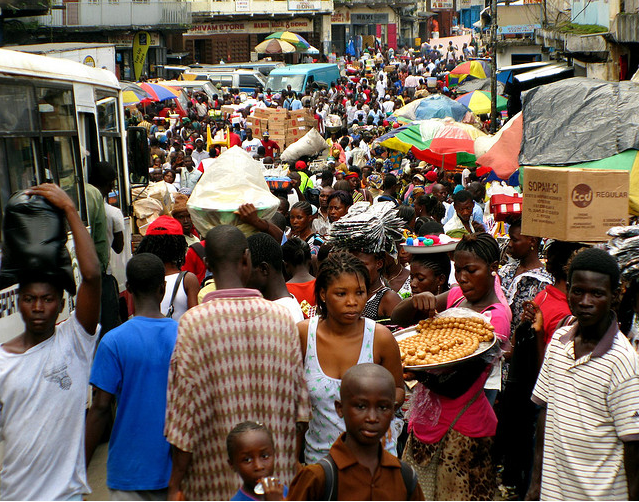 Sani Abacha Street is the most direct motor-able road from Eastern Police to PZ but street vendors make it impossible for cars to pass. Drivers bypass Abacha Street for fear of congestion and the possible palaver between them and traders who refuse to move their goods to allow cars the right away. Swit Salone reporter Alpha Kamara was on Sani Abacha street where it is business as usual but petty traders fear eviction.

It was Kissy street before President Kabbah renamed it Sani Abacha Street in gratitude to the former Nigerian dictator who sent over 1500 soldiers to intervene in Sierra Leone’s civil war between 1997-2000. Over the last decade Abacha Street has become a makeshift flea market because although Lebanese, Indian, and Fulani merchants own the stores petty traders selling cheap plastic chinese goods flood the road.

Talk of relocation which was rife during the 2007 election period has since subsided and business continues uninterrupted for traders, young and old, while angry pedestrians and motorists, wobble to push their way through the man-made labyrinth.

Adama Sesay, a chairwoman of a traders association at Abacha, says more than 5000 young people do business on Abacha Street some coming as far away as the provinces to trade on the street during the peak holiday seasons.

“This is the place where most of them get their school fees and feeding,” she says. Even people from the provinces come to town during peak holiday seasons to sell on Abacha.

Sesay says that any attempt to remove the traders will be difficult. “Where can we get an alternative source of income?” she asks.

But traders like Sesay get little empathy from those who feel that selling on the street have become both a nuisance and a health hazard. The traders create heaps of garbage daily turning the center of the city into an eyesore.

“They have no regard for pedestrians,” said James McFoy, a Wellington resident. He adds that besides the traders the street is infested with thieves and wild people.

To maintain order on the streets of Freetown, the City Council institutes measures to control petty trading in the city by demarcating areas as no go places for traders.

Council wardens were trained under the current administration to ensure that people adhere to council laws, but Abacha is always  challenge. It is the kind of place where a warden could get pummeled if he dares to aggrieve the wrong trader. Overwhelmed the wardens focus more on traffic management and leave the traders to their own devices.

There are all sorts of people are doing business on Abacha Street.   James Koroma, is a  part-time teacher and a trader there who believes that petty trading is driven by demand.

“Sierra Leone is not the only place where people sell in the streets. Almost in all countries world over there are places for businesses like Abacha,” he said.

Koroma says that the real reason why traders are selling on the streets is a question of regulation.

“The Sierra Leone Trade Act should be revisited so that we can be protected,” he says.

“We don’t have shops and we are not importers. Our option is to buy and sell, and we do so in the streets,” he says, adding that the number of traders increases daily.

“Some come and stay while others don’t stay long. But we are all here to sell and earn money to take care of ourselves and families,” he said, adding that he cannot indicate an exact figure of the number of people trading along Abacha Street but can boast of having a membership that can shake any political party in the country.

Koroma was still commenting on the issue when a boy dressed in faded jeans and a black T-Shirt was pressed through the crowd by two police officers.

Women trading on the street scream “Thief!” “Thief!” as they try to land blows on the boy despite the officers’ attempt to restrain them.

By Alpha B Koroma in Freetown