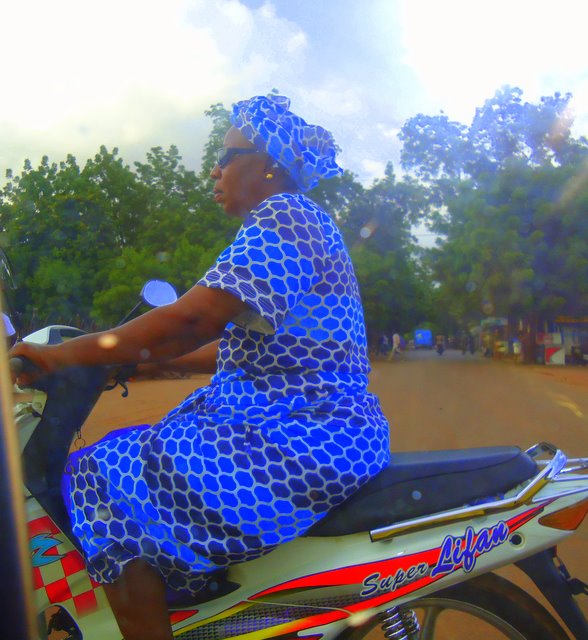 A woman in Bamako, Malu riding an okada

Exactly 2 years ago I took a train from Kayes in Southern Mali to the capital city of Bamako. I remember thinking how calm and peaceful Bamako felt as compared to the usual hustle bustle of some of West Africa’s cities. Today a new video report released by the BBC has left me feeling absolutely discouraged at the loss of Mali. In the video a man was held by two Islamists in public and in daylight as he was flogged for drinking alcohol. I was planning  on returning to Mali again in hopes that I would make it to Mopti, Timbuktu and the famous Dogon country. After watching this video I fear that may not happen for a long time.

I fell in love with Mali in Paris through the photography of Malick Sidibe. Black and White portraits from Sidibe’s studio in Bamako during the Independence era served as a source of inspiration and pride at times when Paris seemed cold to my Africaness. The images reminded me that Africa was cool, that Africa was a mix of old and new, and most importantly that there was a universality to the black African experience. Because the images of Bamako that I saw looked just like portraits that the Lisk Brothers had taken in Freetown around the same era.

When I returned to the US my thesis advisor Susanna Wing was a “Mali expert”, a political scientist who spent much of her time in the country studying its culture and politics. We watched a documentary of how Mali had evolved to a stable democratic nation in the 90s. I read the epic of Sundiata Keita and Mansa Musa and Amadou Hampate Ba’s memiors ‘Amkoullel l’enfant peul‘ and it was a wrap. Mali became my top most destination to visit in Africa.

In June 2010 I left Freetown for Dakar. In Dakar I boarded an old bus headed for Mali. The journey took a ridiculous 40 hours inclusive of border crossings and check points. I spent a day in Kayes and from there boarded a train for Bamako. When we finally got there it was way more developed than I imagined but most of all it was the women that shocked me. 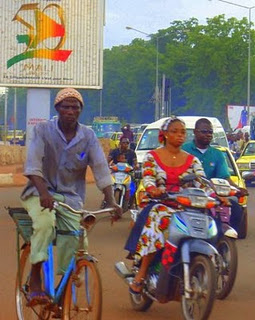 I had always assumed that because Mali was a predominantly muslim society that the women there would be less empowered than women in Sierra Leone. What I found however was the contrary. Women of all ages in Bamako, Mali dressed in both traditional and modern garments and they rode motorcycles (what we and the Nigerians call Okadas). I couldn’t believe it when a woman old enough to be mother dressed in an orange embroidered african gown stopped at a red light re-tied her head tied and sped off when the light turned green. To see a woman on a bicycle in Sierra Leone is an anomaly let alone for her to ride a bike.

I saw a woman paddling a canoe when I went to the riverside to bargain about a boat ride something I had also never seen in Sierra Leone. And later when we went to the market and drove by two multi-storied identical buildings my interpreter noticing that I was staring at them announced that they were owned by a woman. I chartered a taxi with the sign ‘Taxi Oumsang‘ on it. ‘Oumsang’ was short for famed Malian song bird Oumou Sangare, the taxis were a new business enterprise that she had launched that year.

We drove by basketball courts and I saw that it was mostly girls playing. Another shocker. Who knew that Mali’s women’s basketball team were champions? As a result some girls in Bamako had hoop dreams.

By the end of my week-long experience in Mali I felt that it was a place that I could easily live. I considered moving my production company to Bamako. As compared to Sierra Leone, Mali boarded 8 countries. What better place to launch an African Adventure?

When news broke of the toppling of President Amadou Toumani Toure by armed militia from the north in the post Gaddafi era I was not surprised.  Gaddafi was perhaps more of a stabilizing factor in the region than many realized. He had invested heavily in Mali’s oil and hotel industry, not to mention the usual construction of mosques and government buildings. With the movement of fighters from Libya to Mali there was bound to be some level of instability.

However I did not expect that 3 months after the military overthrew the president that Mali would be plundered into its current state. Mali is not an Islamist country it is a secular state as guaranteed by its constitution. Most Malians are muslims but like most practitioners in Sub-Saharan Africa they are neither fundamentalists nor extremists. The idea that Sharia is being imposed on Malians today is shocking and scary.

It is really sad that an otherwise peaceful nation is being destroyed in this way under the guise of Islam. But how do you reverse something like this? An ECOWAS or African Union military invasion seems unfeasible. Mali is just too big. Any military action would take years for a substantial  win, and you can’t go fight the Tuaregs in their own desert. Plus unless backed by the US or NATO who would pay for this intervention?

One plausible solution is perhaps to separate the country into two or into federal styled power sharing state. Whether the pro-sharia militants would agree to this is to be seen. But something has to be done for Mali. If we lose Mali to Sharia, then any other country with a significant muslim population could also possibly be prey. If we lose Mali, we lose the Africa in Mali. Free Mali #FreeMali

Mali Before the Chaos