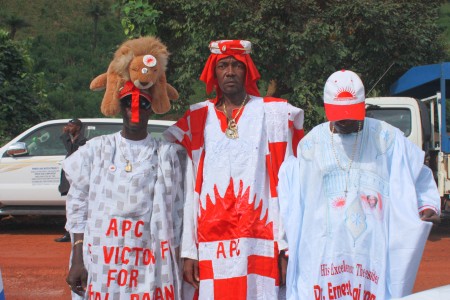 In 10 months Sierra Leoneans will head to the polls to exercise their right to vote. Some believe that this is the most contentious election in the nation’s history.

In the last elections, music played an important role in creating political awareness and also to mobilize supporters for the SLPP, and the APC. The songs of popular musicians became the soundtrack for political rallies and marches. While certain songs were made specifically for each political party, there were many that were not but later became co-opted or used as political tools. 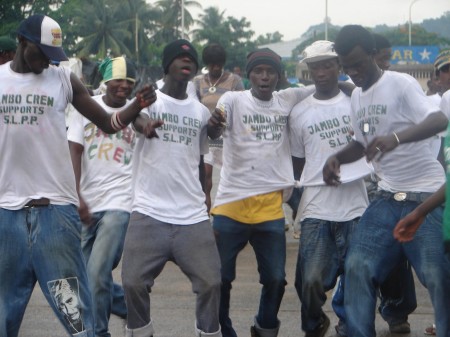 SLPP supporters at a political rally in Freetown in 2007

Our musicians spoke of corruption, poverty, and the dismal conditions under which many lived. But since the 2007 elections Sierra Leone’s they seemed to have lost the ability or the desire to tell the story of the struggle.

In the documentary Voice of the Voiceless, several of Sierra Leone’s musicians, DJs, and key individuals from the government highlighted the roll that musicians played in the 2007 elections. DJ Elijah of Culture radio said that “musicians were prone to corruption” and that they too could be used. He also said that governments do little to improve the conditions of the music industry so that artists will remain poor and at the mercy of the government.

“They are good at something but they are not given the chance to have a perspective so they can grow. I think it is deliberate. They [artists] are being kept in that manner so they can always be used again and again”, he added.

Many artists don’t have funds to finance their studio time and production so they quickly become hustlers looking to peddle their songs to the highest bidder. Case and point, Innocent of ‘Igwe’ and ‘Gi dem notice’ fame. Innocent’s album thanks to the APC made its way into the streets of Freetown faster than you can say ‘Oh sai oh wai’.

While we don’t know if he made those songs for the APC, it is clear that once the party got hold of it, he was made. Is he corrupted as an artist? I don’t know. Will he ever make music now critiquing this government? I doubt.

In the interest of revolution and because we believe that music is suppose to make you do more than shake you waist na big man pala, here are Swit Salone’s Top 5 Revolutionary Election songs:

[I wonder if SLPP will use ‘Gi dem notice’ in their rallies…because at this point it applies to what they want. And on the reverse I wonder if APC will use Na wi na di landlord :-)]