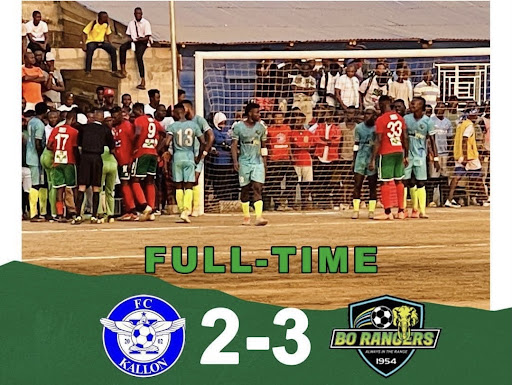 Sierra Leone Premier League defending champions, Bo Rangers FC extended their unbeaten run to match day six after a 3-2 win against FC Kallon at the Angola field in Freetown. In a very demanding match, the Rangers from Bo walked home with all three points, setting them on a two-away win strike so far this season and their first win against the Cavellians in four attempts in Freetown since 2011.

Bo Rangers took an early lead in the 4th minute from kick-off before doubling it three minutes later with goals from Abu Kommeh and Alhassan Noble Darammy. FC Kallon responded by pulling one before halftime courtesy of a goal from Bambah Kamara in the 18th minute.

It was a highly tense match with a brawl between both sides as each team finished with 10 men after Alie Conteh (Nzonzi) produced a very harsh challenge on Abu Bakarr Bangura a few minutes before Halftime.

Early in the second half a goal from Mohamed N. Kabba in the 49th minute sealed the score for the Rangers with Daniel Karim closing the five-goal thriller with a spectacular finish in the 58th minute.

Bo Rangers’ Ibrahim Sesay was named man of the match with the elephants maintaining their two points margin on the league table having 14 points in 6 matches played. East End Lions who also recorded a 1-0  victory on Wednesday against East End Tigers are in the second position with 12 points.

The Elephants will next host Freetown City FC at the Bo Mini Stadium on Sunday, January 8, 2023. before travelling away to Kamboi Eagles in the South/Eastern Derby the following Sunday.