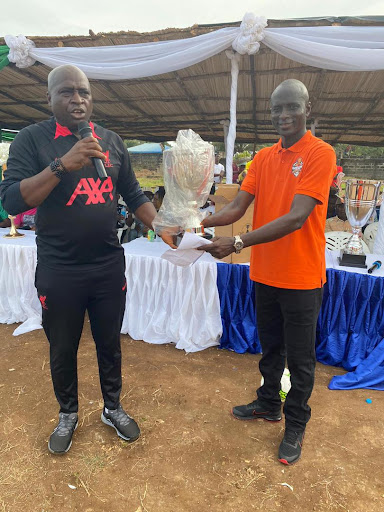 The 21st edition of the Clozet Creation Football Competition has kick-started at the Kaffu Bullom Chiefdom, Lungi. This year 21 teams from Port Loko district, Kambia district, and the Western Area will be taking part in the tournament.

The winner will get a star prize of NLE 100,000 grand prize. Since the start of the competition spectators, there has been a massive turnout of spectators in the Lungi arena, with at least a thousand present on each match day.

From a maiden grand prize of NLE 90 in 1998 to a whooping NLE 100,000 for this year’s winner. This improvement in the grand price speaks volumes of how far the organization has come in hosting its annual tournament.

“Out of the proceeds from previous competitions, we have always allotted an amount for community development. We give scholarships to pupils from challenged backgrounds, and other activities,” Alusine Wurie, the Clozet Creation media officer, told Swit Salone.

For most if not all spectators, the satisfaction that they get from watching local games is priceless.

“We pay thousands in Cinemas to watch international football that has little or no impact whatsoever on our livelihoods and so it is high time we started to support the local games. This is very important for growth and development,” Abu Sesay, a sports enthusiast in Lungi, told Swit Salone.

Clozet Creation Social Development Organization has been in existence since 1998, each year the competition brings together teams from around the country to compete for a star prize.