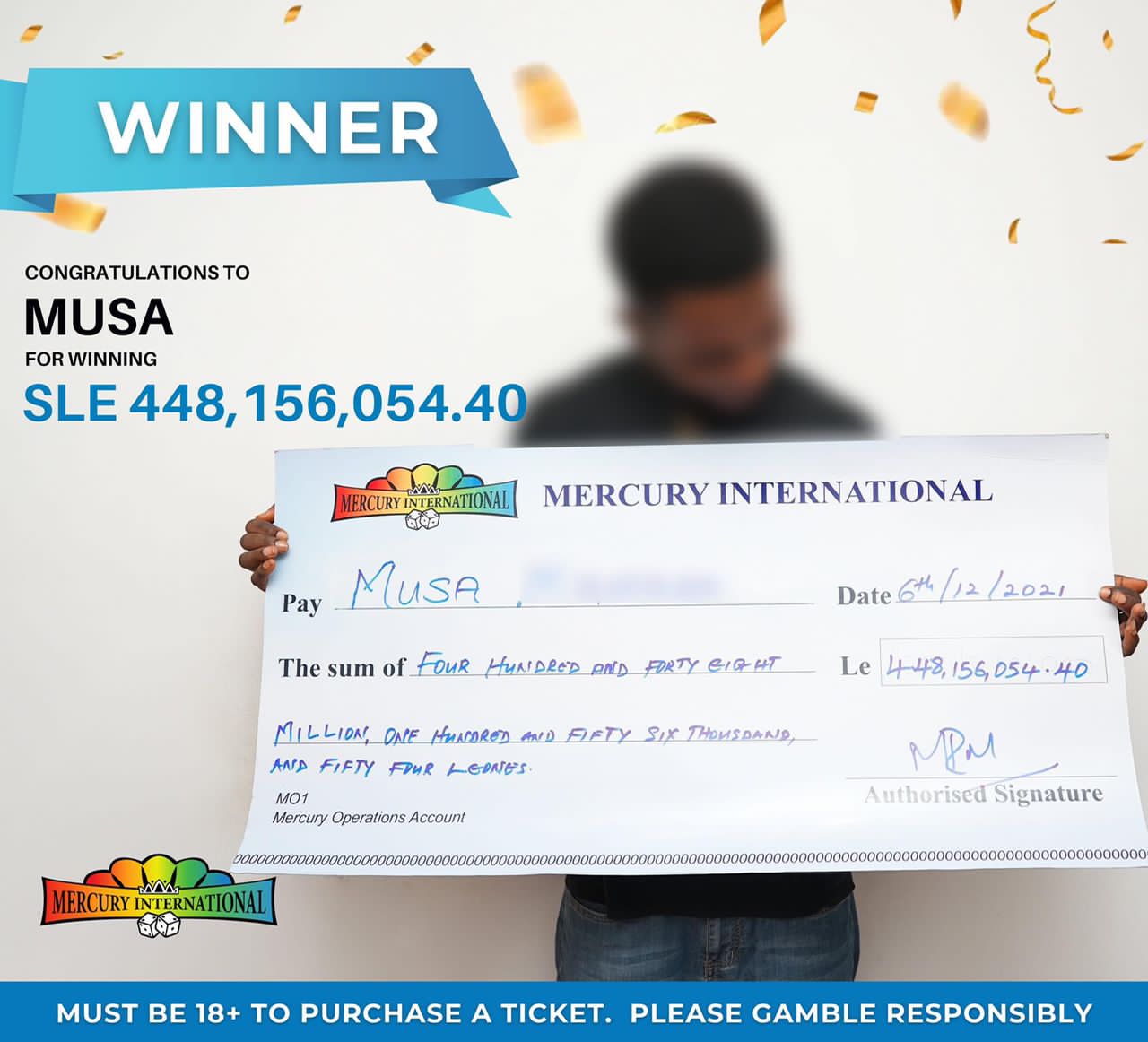 7 December 2021 (Freetown, Sierra Leone) – Musa Kamara made history this weekend by becoming the first person to win over 500 million leones on a single sports betting ticket before tax deductions. Kamara bet 5,000 leones on 14 teams at his local Redbox Mercury Bookie at Gabriel Street in central Freetown. He won 558,914,818 leones; a total payout of 448,156,054 leones after tax deductions were paid to the National Revenue Authority.

Kamara had bet just 5000 leones on the outcome of 14 different football matches over the weekend. All the matches ended as he had predicted. He took his winning ticket to Mercury’s head office on Monday morning, and he was paid on the spot!

Kamara said he bets with Mercury International all the time. Two years ago he got really close to winning when he bet on the outcome of a match between Manchester United and Real Madrid, but Man United had lost. This weekend Kamara said his win was just pure luck.

“I had wanted to bet on Marseille. The bookie told me that he had made a mistake, but instead of changing it, I accepted the bet against Marseille. I was in the cinema watching the game. Marseille scored first, and I shook my head in disappointment, but then Brest not only equalized, but they also scored the winner. I was so happy!”

Managing Director of Mercury International, Martin Michael, congratulated Kamara on his historic win and expressed their commitment to Fairplay and speedy pay to all winners.

“Mercury is thrilled to pay today because that’s why we are here; to allow Sierra Leoneans to play our games with confidence whether it is sports betting or the lotto, we will always pay,” said Micheal.

Before Kamara’s historic half a billion leone win, Abdul Rahman, a trader in Bo, Southern Sierra Leone, held the record for the highest individual football betting win when he won 311 million leones after-tax deductions. Before that, it was Mrs. Sesay, a petty trader in Freetown with a 272,290,000 leone win.

“With such a reputation for a quick payout, it is no wonder Mercury International is the most trusted national sports betting and lottery company in Sierra Leone,” said Kamara.
Mercury International launched its lottery and sports betting products in 2007. Its products include the 5/90 lottery, sports betting, online betting, Zone, Rapids, and Virtual Rapid games. To celebrate the holiday season, Mercury last week launched a 50 percent bonus promotion on winning bets made each Monday and Friday in December 2021.