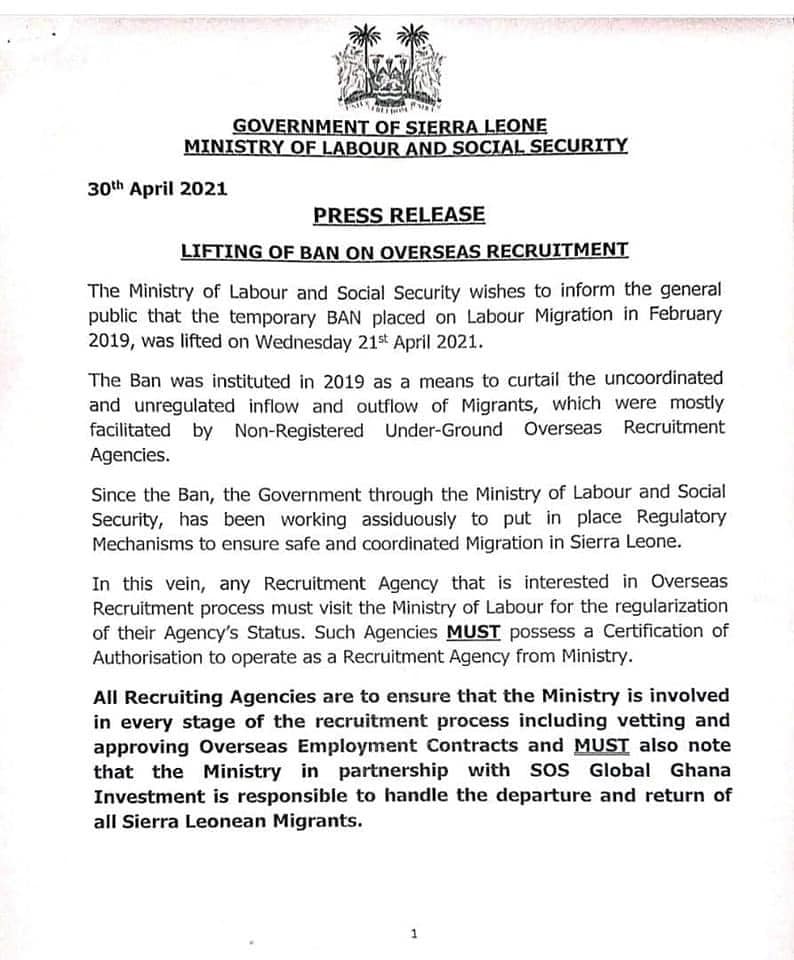 The Government of Sierra Leone through the Ministry of Labour and Social Security has in a press statement released on Friday, April 30, 2021, lifted the temporary ban placed on overseas recruitment.

According to the press release, in February 2019 the government imposed the ban on labor migration as a way to reduce the number of uncoordinated and unregulated inflow and outflow of migrant workers. These activities were being facilitated by non-registered underground overseas recruitment agencies and which was having a negative impact on the migrants.

In recent months there have been several reports of trafficking of migrants who were recruited to go work in different countries (Lebanon, Qatar, Egypt, etc). However, when they arrive in these countries they are forced to live in poor conditions, and most of the women are forced to work as sex workers.

Since the ban was imposed the government has been working tirelessly to set up regulations to ensure safe and coordinated migration for Sierra Leoneans. So far the Ministry of Labour and Social Security has called on interested recruitment agencies to complete their certification and authorization process.

“All recruiting agencies are to ensure that the Ministry is involved in every stage of the recruitment process including vetting and approving overseas employment contracts,” as stated in the release.

Finally, the ministry called on the general public to not involve in travel transactions with any individual or recruitment agency without proof of the approved employment certificate and confirmation. The authorities in major border crossings are also informed to deny departing labor migrants without evidence of the necessary documents approved by the Ministry of Labour and Social Security.