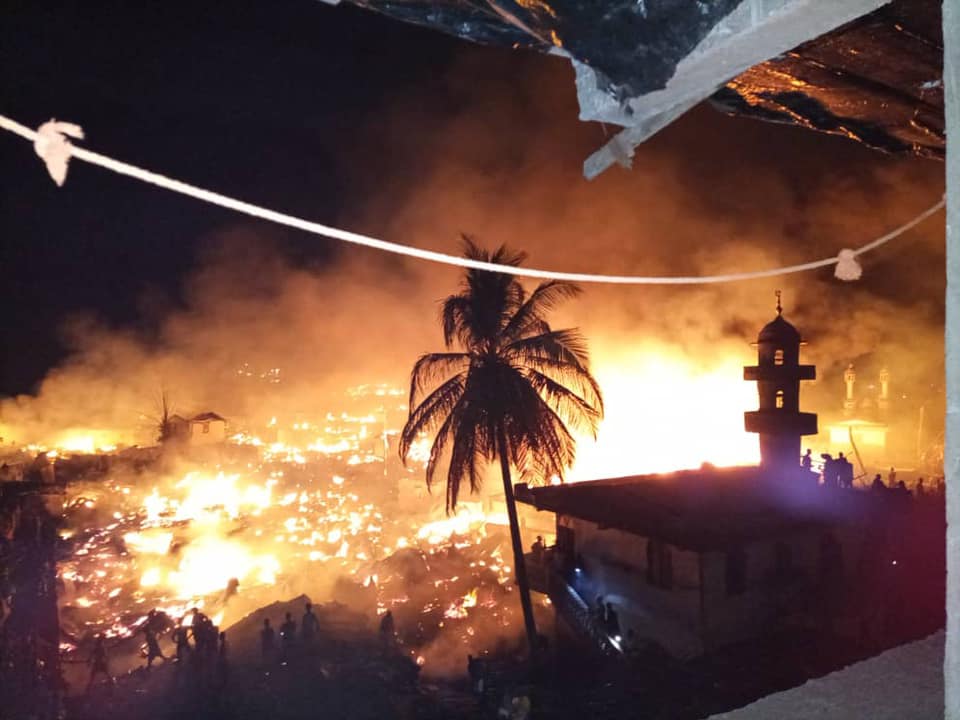 A fire outbreak on the night of  Wednesday, March 24, 2021, had occurred at Susan’s Bay in the Eastern part of Freetown leaving thousands homeless.

According to a social media post by the Mayor of Freetown City Council, Yvonne Aki Sawyer, the entire community has burnt down to the ground and thousands of people including children have been affected.

“Just left the scene of a terrible fire at Susan’s Bay. The entire community has been burnt to the ground. Thousands are affected. We won’t know the full scale of the disaster until tomorrow when we conduct an assessment with the National Disaster Management Agency and other partners. Many children are missing, separated from their parents in the chaos. Twelve children were at the FSU at the Eastern Police station. We understand that other children might have boarded boats moored on the wharf,” said the Mayor.

Investigations are still pending as to what might have caused the fire and the damage caused. The Mayor stated in her post that the National Fire Force was unable to access the scene because the main entrance was blocked by a six-storey building under construction as a result of poor urban planning and ineffective collaboration between the central government and local councils in urban planning.

“Disaster risk reduction cannot happen without effective urban planning and a building permit regime which is focused on reducing environmental and man-made risks. Local councils are best placed to deliver these mandates and even as we once again face disasters like this terrible fire, we trust that devolution of land use planning and building permit issuance will happen soon. We believe that this will through policy design help to mitigate against these disasters,” she concluded.

Susan’s Bay is regarded as one of the most improvised slum communities in the central part of Freetown with no access to proper drinking water and sanitation. The community is prone to natural disasters such as flooding, disease outbreak, etc…

This incident is the second major fire outbreak in slum communities within the last two years, in 2019 another fire hit the Kroo Bay community and left thousands of people homeless. Also in recent months, there have been fire accidents in other communities in Freetown and different parts of the country.