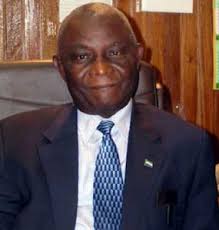 Solomon Ekuma Berewa. It would be impertinent of me to attempt to write a eulogy of this great man as there are others who know him much better than I that could make it more authoritative.

I was however fortunate to know him in many circumstances –family, CKC Old Boys Association, SLPP Politics etc. With him, it was always a case of WYSIWYG (What You See Is What You Get). I took over from him as President of the CKC Old Boys Association (COBA). His doors were always open to our executive for his wise counsel. “Bra Solo” as I called him, loved CKC, which gave him his secondary school education. He was a foundation student in 1953 and always gave his all to the school. He was at the time of his demise Chairman of the school’s Board of Governors. The debate still rages in CKC circles as to whether another CKC alumnus and a student of Berewa’s when he later taught at CKC, Charles Francis Margai robbed Berewa of the Presidency with his defection from SLPP and formation of PMDC.

Solomon Berewa was brutally honest in politics, as I remember. I recall that when as senior SLPP members we had a dispute within the party, visiting him for counsel did not always result in him being in sympathy with your cause. He would publicly lambast National party officials who would often leave his house with their tail between their legs. I recall at a convention in Bo after he had lost the 2007 elections, an erstwhile avid supporter of his who had “sold him out” unluckily appeared on stage to fix a microphone. Berewa spotted him and gave him a good public tongue lashing-“Look at this traitor in his oversized “jongs” coat. These are the sort of people we don’t need in this party.” Mr “jongs coat” had to hurriedly escape from the stage.

Berewa’s views on a losing SLPP flag bearer continuing in the office were well known. He would often say: “When elections are finished the winner becomes President and the loser automatically ceases to be a flagbearer because there is no flag to bear.”

He is respected as one of Sierra Leone’s finest criminal lawyers. His admirers (and these are no “two by four” lawyers but amongst the finest legal minds in the country) say he had a razor-sharp intellect and would tie up witnesses in knots with his probing questioning until he achieved his results.

Berewa’s tribute at President Kabbah’s funeral however, illustrates the moral greatness of the two men- Kabbah and Berewa. That Berewa was extremely angry with President Kabbah for his loss of the 2007 elections would be an understatement. I was on the floor of the SLPP convention in Kenema in 2009 when he gave a verbal lashing to Kabbah and accused him of being deceitful. The embarrassment in the hall was palpable. The rumour mill had it that they were not on speaking terms.

Fast forward to Berewa’s tribute at Kabbah’s funeral when he waxed effusively about Kabbah…”Kabbah was not vindictive and revengeful… He was a man of moral greatness…..Thank God we met a man like that”.  It is also a measure of Berewa’s Christianity and greatness that he found it in his heart to reconcile with President Kabbah long before his death. Though he had been urged by his children to do so, he seemed to have taken things a step further by visiting him frequently and actively engaging him and his family. It was not therefore surprising that he was at President Kabbah’s bedside barely ten minutes after his death. Those who were there say he wept uncontrollably. This foot soldier for President Kabbah who was by his side taking care of the legal niceties of the peace negotiations said further: “He was a democrat true and true, a patriot who took the rule of law as a basis for democracy”.

Berewa had his critics of his handling of the Lome Peace accord. It was interesting to note the civil but firm exchange that took place between himself and Dr. Peter Tucker on the Lome Peace accord during the launch of Dr Peter Tucker’s autobiography, “The Mission boy from Shebar” at Balmaya Restaurant. It is a well-known fact that President Kabbah and Peter Tucker fell out over the Lome Peace accord. VP Berewa, the architect of that accord opined that there was nothing else that could have been done considering the rebels were at our doorstep and were about to take over the city of Freetown. Peter Tucker stood his ground and affirmed that his views have not changed. He retorted:

“It was seriously flawed in a number of respects. In my opinion, it was not only morally wrong but illegal to grant general amnesty to persons who had committed the most horrendous violations of human rights, tantamount to war crimes in International Law. And it was insensitive to give the main perpetrators of such crimes Cabinet Ministerial posts with official vehicles and housing while their victims were left to wallow in their misery, homeless and hungry.”

Dr Tucker also denounced the setting up of the special court. Their exchanges were animated but civil.

Excerpts from an article I wrote about Berewa in 2013 (SOLO B-BEST PRESIDENT THAT NEVER WAS?) on the launching of his book “A new perspective on Governance, leadership, conflict and nation-building in Sierra Leone”  at the British Council on February 28th, 2013, reproduced below however best illustrates what I know of the man.

“Those who know Solo B know he takes no prisoners. His detractors accuse him of vindictiveness, being ungrateful to President Kabbah and wallowing too much on the vote cancellation issue by Christiana Thorpe. His role in many other issues like the Hinga Norman incarceration, the treason trials, Charles Margai’s defection as well as his choice of a running mate who many says was “foisted “on him are deftly handled in the book. I will leave readers who read the book to be the judge of whether he addresses supposedly negative perceptions well.

I will however, dwell on what I know about Solo B and how this seems to be borne out in this book. I have known him in his capacity as the President of the CKC Old Boys Association (COBA) and as Vice President. I know him as an urbane, deeply religious man, thorough in what he does who eschews bigotry. He was known for his attention to detail and quick grasp of issues during his tenure as Vice President….. I do know from his handling of appointments during his tenure as Vice President that he favoured competent people and from his involvement in SLPP peace talks that he is very measured and fair in his approach.

I would like to highlight a few from the book to illustrate these virtues.

A patriot with a penchant for religious fervour: Solo B could have marshalled supporters to protest the results of the elections and whip up a frenzy that could have resulted in violence and division of the country but he chose not to. “The first line of the prayer of St Francis, “Oh Lord make me an instrument of your peace”………strengthened my will to pursue the course of peace……….. It helped me make up my mind that the best course of action was to demonstrate good leadership…… and to advise my numerous supporters  who were then teeming around me to have faith and to realise that right is might…. and that with faith they should all at that moment, dare to do their best and their duty for their country and their people as they understood it”

A man of conviction: He has always stood up against what he thought was not legally right-especially the nullification of results from some polling stations against constitutional and legal provisions. “The Chief Electoral Commissioner would, of course, say that at the time she declared the results of the run-off election her conscience was clear about her invalidating 169,054 votes cast on my behalf at the 477 polling stations which she invalidated as containing excess votes. Of course, every person’s conscience can be clear if that person sets a low standard for his or her conscience to follow. This was exactly what the Chief Electoral Commissioner of Sierra Leone did in the election of 2007.”

Loyal, Swift to chide and swift to bless: He has made several scathing remarks about President Kabbah which make interesting reading, detailing how an initial friendship and mutual respect changed to distrust. Through all of this, he was loyal. Despite this, he seems to take a more realistic stand on the issue in his postscript. “I will ever remember him as a good friend because he seemed to treat me so. This was of course when he needed my services. At that time he would lead me through the garden path showering many praises on me. When he no longer needed my services he would abandon me in the lurch. This might not be typical of the man.”

A nationalist who is not bigoted. He evenly apportions the blame for the country’s ills and identifies Sir Albert Margai as the one who started bringing tribal considerations into politics.

“Albert Margai became the first person who constituted a turning point in the democratic process Sierra Leone had embarked upon under Sir Milton Margai. He was not particularly keen to promote national cohesion, but only to enhance his grip on power. Thus he started to rekindle the now-forgotten north and south and Mende-Temne political divide and rivalry. That rivalry has unfortunately persisted ever since and it has manifested itself in different forms especially in times of political contests.”

Respect for Authority: It is his relationship with President Koroma that appears strange to many partisans. “Personally I have always been and I am still on good terms with the incumbent President–as President, he has always treated me with respect and decorum whenever we meet. He demonstrates this by occasional telephone calls he makes to me asking after my well being. I appreciate those calls……. I hope that this will be an enduring mark of his presidency or the usual sounds of praise singers who are never in short supply in Sierra Leone and the same persons would behave no differently to me if I was in power.”

The question one would like to ask is how would a President Berewa have steered the ship of state? He has espoused good ideas on governance, leadership, conflict and nation-building which future leaders can learn from lessons from history are particularly pertinent. Is Berewa the best President we never had? Ponder his writings and his character and be the judge. “

These observations are true as true today as they were then. After his retirement, he became a respected statesman, who earned the respect of both President Koroma and President Bio. He still continued doing the things he liked-serving his school, his Church and proffering his wise counsel to many when called upon. Solomon Berewa like all mortals was not without his faults, however, we will always remember him as a truly great man. Let us remember the family in our prayers at this difficult time of grief.

Words attributed to Edward Hazen Parker in the Funeral Ode on James A. Garfield are appropriate at this time for Solomon Ekuma Berewa: