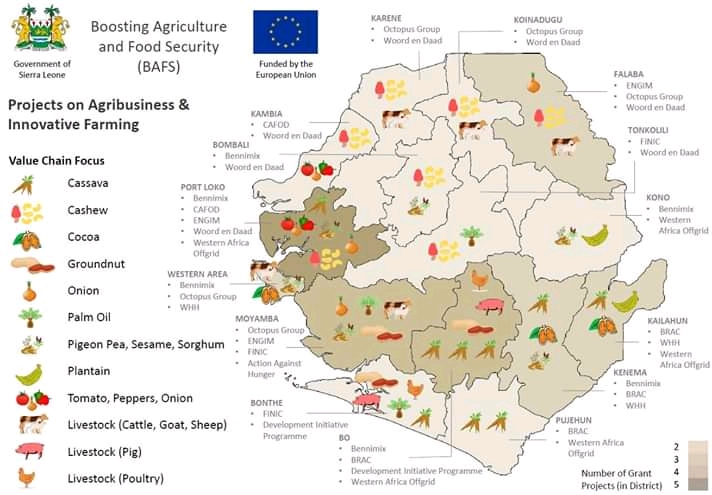 Almost a dozen EU funded locally owned agricultural projects have started in Sierra Leone. The European Union in Sierra Leone announced on Facebook that the 11 funded projects will support the country’s drive towards food self sufficiency. The funded projects range from crops & livestock diversification, and farming all geared towards investment promotion and job creation for youth, and women.

The projects are being implemented by the Boosting Agriculture and Food Security (BAFS).

According to the projects announcement on the EU’s Facebook page, they stated that they are confident that these projects will stimulate youth-led agribusinesses in Sierra Leone.

The BAFS Project is being implemented by the MAF and it covers 15 rural districts in Sierra Leone. The project is scheduled to run for 4 years which is from 2017-2021.

The BAFS Project is the follow-up project to the recently completed Agriculture for Development (A4D) program. The project is expected to further develop the results of the A4D project, taking into consideration lessons learnt and building on successful activities.

The overall objective of the BAFS project is reduction of poverty and food insecurity in Sierra Leone through better governance and household improved living conditions and higher incomes.