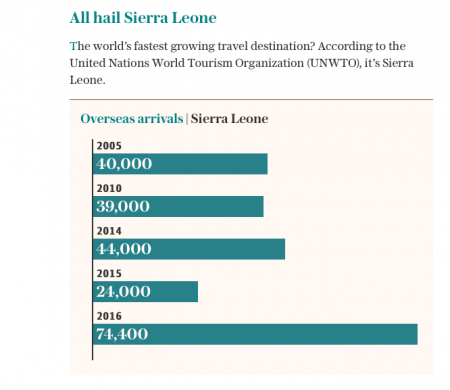 There is an article going around. The headline says that Sierra Leone has the fastest growing tourism. This is true but it is also misleading. Tourism has grown but it is “fastest” growing in Sierra Leone because of how ebola impacted the nation in 2015.

When Ebola hit West Africa the entire region saw a decline in travel. In fact even countries in East Africa with no known Ebola cases reported a decline in travel as paranoia set in amongst those who don’t know their Nigeria from their Kenya or their Uganda from their Liberia. In October 2014, National Geographic reported that an extended family of 30 from New York that had booked a $197,000 safari to South Africa cancelled because of ebola fears. The effects of ebola on travel and tourism hit the entire continent.

Travel to Sierra Leone in 2015 hit an all time low. Even if you wanted to go to Sierra Leone during this period there were very little options and the prices were astronomical. My father who had booked on British Airways had to spend months waiting to be rerouted because they stopped flying to Freetown, as did Air France, and even regional carrier Kenya Airways.

Country Director for IGC Sierra Leone & Liberia, former UNDP diplomat and ex Government of Sierra Leone advisor Mr. Herbert M’cleod in a Facebook comment shed some much needed light and context on the tourism stats. He says that the reason for the spike is that travel during Ebola had sunken below the normal number of international visitors. 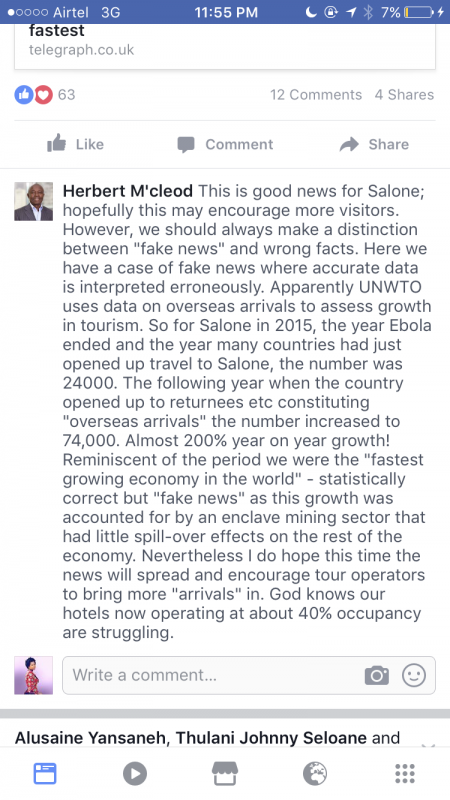 There isn’t a Sierra Leonean who doesn’t wish the country was booming with tourists but the fact is that it isn’t. In order to really open up Sierra Leone’s tourism industry still needs to do away with government placed barriers that impede tourism growth like heavy levies on airfares and limited visa on arrival facilities. You can travel to Senegal for almost two to three times less from the UK than you can travel to Sierra Leone and that needs to change

If we want tourists, we have to earn them. We need to fix our health infrastructure because no one wants to vacation without emergency health care. Most importantly we need to empower local businesses with the hospitality industry by creating financial incentives that allow them to set up easily, and grow.

Facts you need to know about Sierra Leone...

A 14-day inter-district lock down has been issued...