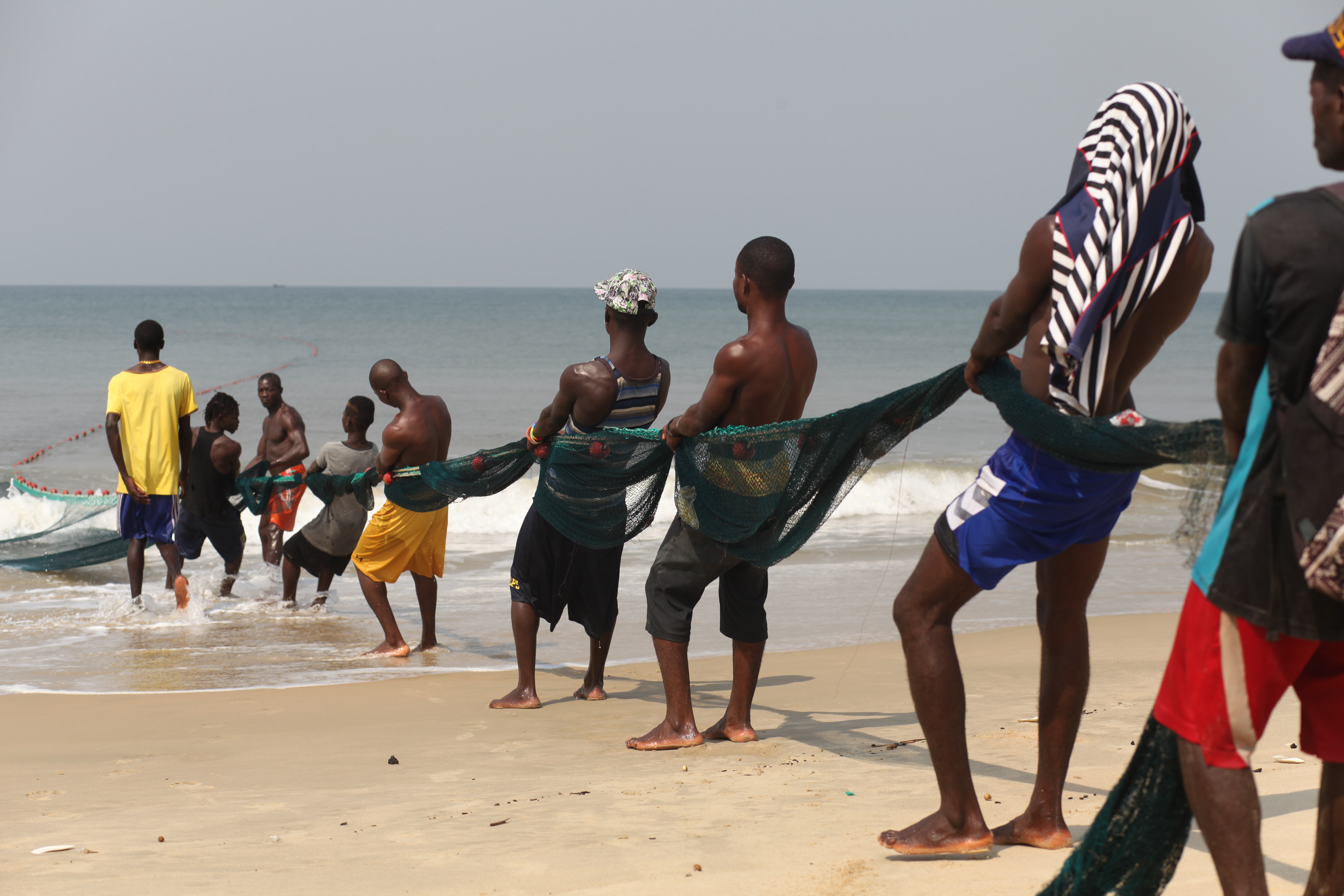 Lumley Beach is more than just a major tourist attraction, it is also a market place where artisanal fishermen, and “fishuman dem” fish-women  meet their customers. The men who fish and the women who sell work on a system of distribution of labor, trust, and teamwork.

On any given day, fishermen at Lumley beach work together in groups of up to 20 men each with one net, standing on opposite sides of the beach. There is a fisherman at the very back of each line acting as an anchor, as he and his fellow men play a game of tug of war with their net, against the fish. Bringing in the net to shore against the currents is very laborious but in Africa we say if you want to far you go together, alas that is how they manage, by working together.

While the men on land work to pull in the net, another heads out (in this case) in a red and white canoe. Known simply as ‘OBlacks’, his job is to push the line from the sea offshore for those drawing the net. This toing and froing with the net and canoe can last as long as 3 hours. They start work at about 5am and are often wrapped up and gone by 8 am.

The days catch are sold to fish-women who retail the fish right there on the beach. The earnings from the fish are distributed using an already established system developed by the fishermen. In the payment structure, the captain is at the top of the ladder and he knows who to give what according to their labor and effort.

Sally Cole who is the chairlady of “One Pole Fish-women” cooperative explains that in 2016, they were approached by a local organization; Sisters Keeper. They are an organisation that focuses on empowering women. They donated funds to the business, constructed a “baffa” for the fish-women to help them stay protected from the harsh sun rays as they go about cutting, cleaning, and selling their fish. The Tourist Board were reportedly also invited for a special ribbon cutting ceremony.

Most often, the fishermen bring in fish like; barracuda, snapper, bole fish, crab, shrimp, and grouper.

Buyers do stop-by, make a selection and fish sellers such as Fatmata Vackie, and Adama Kanu clean and sell the fish to them. Ms. Vackie says that on the days when they acquire large amounts of fish, they tend to take them down to be sold at Dove Court. They also dry ‘smoke’ fish for customers travelling abroad. In addition, Ms. Vackie expressed that red fish tends to be the customers’ choice in the Lumley area. One Pole Fish-women buy one dozen snapper from the fishermen for around Le 290,000. They will then add 10% on top for retail. One grouper weighing in at around 3kg can sell for Le 500,000.

These hard-working men and women make it possible for tourists and locals to have a taste of the various types of fish Sierra Leone’s beaches have to offer. If you’re in need of fresh fish from Freetown, make sure you stop by at Lumley beach to get fresh fish of the day’s catch.